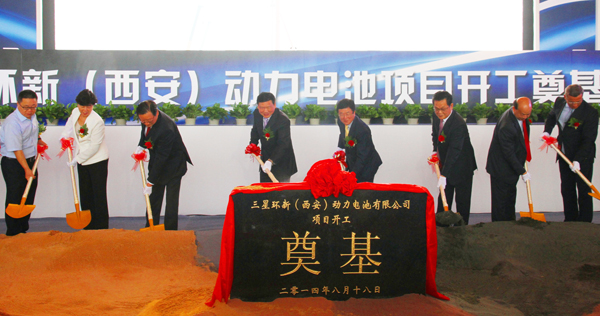 Samsung SDI has started building a battery plant in China to tap into the world’s largest electric vehicle market, with a goal to bring in revenue of more than $1 billion by 2020.

The factory, which will start operating next year in October, will manufacture cells for electric vehicle batteries.

Samsung SDI will be the first battery company to carry out the entire production process for vehicle batteries in China. The plan, which will receive $600 million in investment from Samsung SDI, will make more than 40,000 electric vehicle batteries per year.

To target the Chinese market more effectively, the company signed a memorandum of understanding in January with China’s Anqing New Ring Group, the No. 1 car engine piston and cylinder maker in China, and the investment firm Xi’an Gaoke Group.

The two companies then established Samsung Huanxin Power Battery Company in June with an investment of $600 million by Samsung SDI. The Korean battery maker owns 50 percent of the battery company’s shares and the other half is held by Anqing Huanxin Group and Xi’an Gaoke Group.

It will also supply batteries to Samsung SDI’s energy storage system company, which will be established next year.

“If we combine the capacity and knowledge of Samsung SDI and Huanxin, the Xian plant will become the best car battery plant not only in China but in the world,” said Park Sang-jin, CEO of Samsung SDI, at the ceremonial groundbreaking. “We hope that Xian, which was the starting point of the Silk Road, will drive the future with technology for new energy.”

It is also encouraging its citizens to purchase electric cars through tax exemptions and subsidies.