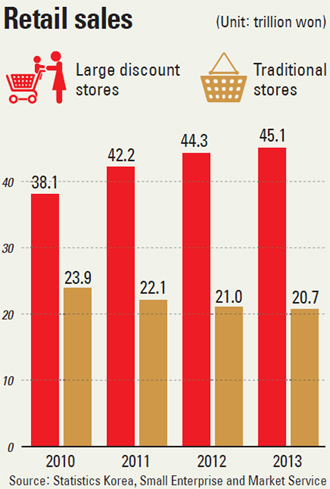 Despite government efforts to encourage people to shop at traditional markets, which have been in a state of depression recently, a report yesterday showed that their overall sales have dropped over the past five years.

On the other hand, sales at large discount stores operated by conglomerates surged despite the government’s attempt to limit their business operations and divert sales to mom-and-pop shops.

According to a study released yesterday by Rep. Kim Han-pyo of the ruling Saenuri Party, the number of stores in traditional markets nationwide increased by 6.9 percent, or 89 stores, from 2009 to last year, but sales at those stores fell 9.5 percent, or 2.1 trillion won ($2.06 billion), from 22 trillion won in 2009 to 19.9 trillion won last year.

The study is based on figures from the Small and Medium Business Administration upon request by Kim, who is also a member of the National Assembly’s Trade, Industry and Economy Committee.

But the efficacy of the government’s policies has been questioned by people who argue that despite state funding, traditional stores have not been revived. From 2009 to 2013, the government spent more than 1.2 trillion won on modernizing traditional markets so that they could compete with large stores. The money went toward upgrading market facilities and helping stores create new management ideas.

Still, the study showed that in 2013, sales were the highest at Lotte Mart’s Guri store in Seoul, with 162.5 billion won, more than 11 times that of the average sales raised at traditional markets last year, at 14.5 billion won.

“The government is currently promoting policies to revitalize the economy for ordinary people but in order for those efforts to bear fruit, it is important that traditional markets get a boost first,” Kim said.

“The government should come up with support measures so that traditional markets are able to develop unique products, pave the way into setting up online shopping malls and also manage product quality.”