Bureau chief of Sankei is grilled over Park story

Bureau chief of Sankei is grilled over Park story 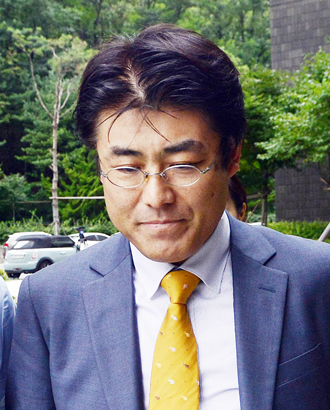 The Seoul Central District Prosecutors’ Office questioned Kato, 48, on the evidence behind his controversial article published in the Sankei Shimbun’s Aug. 3 online edition that implied Park was missing for seven hours on the day the Sewol ferry sank, secretly meeting a recently divorced former aide outside the Blue House.

The case is being observed closely because it could worsen already frosty Korea-Japan relations.

It was a rare instance of Korean prosecutors summoning a foreign journalist to defend a report.

Kato was grilled by officials to determine if the article was attacking the Korean president’s private life based on groundless rumors. Prosecutors requested Kato submit documentation proving the allegations he wrote in his article.

Kato, who appeared at the prosecutors’ office at around 11 a.m., was accompanied by an interpreter and attorney.

Kato’s Japanese-language report entitled, “President Park Geun-hye, missing on the day of the ferry’s sinking … With whom did she meet at the time?” cited sources such as a column from the Chosun Ilbo and unidentified sources in Korea’s financial industry.

It also quoted a comment by Park’s chief secretary Kim Ki-choon, who said at a National Assembly hearing on July 7 that he had “no idea of the whereabouts of the president for seven hours during the day on April 16,” the day the Sewol ferry sank off Korea’s southwest coast, killing over 300 people.

A local civic organization filed a defamation suit against the Sankei Shimbun on Aug. 9.

Seoul prosecutors last week imposed a travel ban on Kato and initially ordered him to appear for questioning on Aug. 12.

Kato asked for a postponement of the summons in order to hire an attorney.