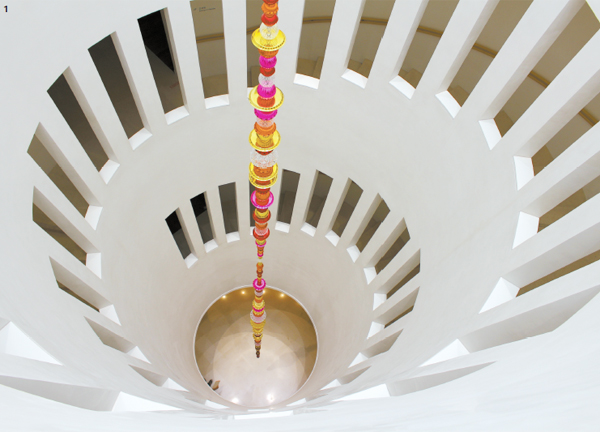 1. Choi Jeong-hwa’s “Alchemy”(2014) is installed in the Leeum, Samsung Museum of Art’s rotunda as part of the “Beyond and Between” show to celebrate the museum’s 10th anniversary. The exhibition seeks correspondence between the past and present, East and West, and artists and viewers.

Two Goryeo Buddhist paintings known for their elegance, intricacy and rarity are now on display in a corner of the Leeum, Samsung Museum of Art in central Seoul. “Amitabha Triad,” National Treasure No. 218, is included in the pair and is one of the most important pieces in the Leeum’s collection.

The paintings were previously shown alongside other artifacts from the Goryeo period (918-1392), such as statues of Buddha and inlaid silver utensils for rites.

Now, however, to the left of the artwork is renowned Swiss sculptor Alberto Giacometti’s bronze “Diego Seated.” To the right is “Untitled,” Mark Rothko’s abstract expressionist painting.

But they don’t arouse a feeling of dissonance. Giacometti’s skinny but dignified bronze figure looks like a modern version of the Gautama Buddha statue under self-mortification. “Untitled” has a sublime ambience, which is the artist’s well-known quality, and its dark red and black colors harmonize with “Amitabha Triad.”

This is the first time that the Leeum has displayed modern and contemporary art in Museum 1, which was once exclusively reserved for its traditional Korean art collection.

The change is part of the “Beyond and Between” exhibition, which began yesterday to celebrate the museum’s 10th anniversary.

Byron Kim’s paintings, inspired by the color of Goryeo celadon, are exhibited with the celadon works while Yee sookyung’s plump black-glazed ceramic sculpture and a white porcelain Joseon moon jar appear side by side.

“In this exhibition, we want the audience to see the past, present and future together,” said Hong Ra-young, the deputy director of the Leeum.

“With the reorganization of the exhibits, we attempt to look at Korean art from a new perspective and focus on situating it in the context of world art history,” said Woo Hye-soo, the museum’s chief curator.

“At Museum 1, we explore the possibility of reinterpreting art through a dialogue between traditional and contemporary art beyond time,” she continued. “At Museum 2, we seek a communion between Korean art movements and the global art world.”

The exhibits in Museum 2 have been entirely shaken up. The works, once classified by region and in chronological order, have been rearranged by theme.

For example, pieces by Park Seo-bo, who led Korea’s dansaekhwa (single-color abstract painting) movement, are displayed with American conceptual artist RoniHorn’s cast glass sculptures and Canadian-American artist Agnes Martin’s minimalist paintings. Together they show the artists’ interests in Zen philosophy and their efforts to achieve a spiritual essence through simplification, a theme that penetrated the Eastern and Western art worlds in the late 20th century.

Meanwhile, the works of hot contemporary artists, which easily attract and amuse visitors, or invite them to interact with the pieces, are installed in the Leeum’s Ground Gallery, Black Box and in some of its transit spaces.

4. Swiss sculptor Alberto Giacometti’s “Diego Seated,” left, and American abstract expressionist Mark Rothko’s “Untitled” painting, right, are installed alongside Goryeo Buddhist paintings including “Amitabha Triad” (National Treasure No.218, center) creating a strange harmony not only in their colors and themes but also in the religious ambience that penetrates the past and present., 5. From left: Korean abstract painter Park Seo-bo’s “Ecriture 88813” (1988); American conceptual artist RoniHorn’s cast glass sculptures “Ten Liquid Incidents”(2010); and Canadian-American abstract painter Agnes Martin’s “Untitled #9”(1980) are displayed together to show the artists’ interest in Zen and efforts to reduce and simplify in a spiritual or intangible essence. First photo by Moon So-young. Rest provided by the museum

One is Choi Jeong-Hwa’s “Alchemy”(2014), an 18-meter (59-feet) long work hanging from the Leeum’s famous rotunda, which was designed by Swiss architect Mario Botta. The work looks like a splendid Venetian glass chandelier but, in fact, is made of cheap plastic containers commonly used in Korea.

“His work draws people’s attention through the introduction of kitschy elements that appeared in Korea’s rapid industrialization process,” Woo said.

On the other hand, Ernesto Neto’s architectural structure “Symbiointestubetime” offers a multi-sensorial experience of sight, movement and smell while Olafur Eliasson’s new installation “Gravity Stairs”(2014) lead walkers on the staircase to experience the illusion of a wonderland of distorted gravity and hypnotic circles.