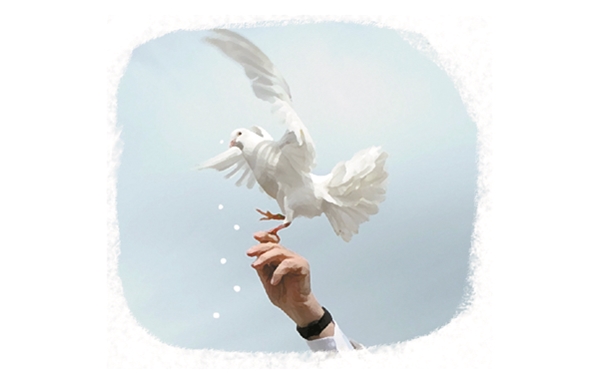 We were intoxicated under a holy spell over the last several days while we had Pope Francis with us here in Korea. It was like coming to the bosom of home after an arduous journey. Troubles drifted away, pains diminished and the world looked peaceful and worthy of living. Spiritual surrender is an unfamiliar concept to atheists who believe gods are man-made creations. That is why most of us live in a state of self-hatred. It is why we are helpless against one tragic incident after another and hurt ourselves with endless blame games and fights fuelled by competition and spite. The pope’s visit touched even an atheist like me.

Pope Francis, the first pontiff from the Southern Hemisphere, makes it a point to reach out to the poor, vulnerable and weak. He is a humble holy figure who dispells the obliviousness of today’s world and allows it to see the true essence of things. Unlike hermit sages who forsook the world for self-realization, he mingles in the heart of the world traveling the streets with a beaming smile and comforting gestures.

Yet he is tough in condemning the greed and injustice of capitalist materialism. Even the sharpest and most critical intellectuals were humbled by his spiritual message that allowed no historical or political interpretations. The leader that commands 1.2 billion believers around the world was consistently modest in his demeanor. We were enthralled as we followed his simple yet inspirational path that led to the hearts of everyday people. He touched and released the masked and inexplicable frustration and pains of every heart in this land.

Today is no different from any other day except that the healer has gone, leaving us enormous tasks to solve amongst ourselves. It is as if he has shown us the way and said, “Friends, now be about your business on your own!” His Masses produced unprecedented scenes of the bringing together of all the discarded and overlooked pains and conflicts weighing over our society: families living in mourning and disbelief after losing their children in the Sewol ferry sinking, residents of the southeastern provincial area of Miryang who have been protesting vainly against a power utility’s plan to run high-voltage power lines through their neighborhood, the fishing village of Gangjeong in Jeju demonstrating against the construction of naval base, laid off Ssangyong Motor workers, and aged comfort women who still wait for a sincere apology from the Japanese.

We must repay the pope for paying attention to our neglected and giving them the enormous support and comfort they had been missing from their own people. The pope left us with the tough-love message that we must care for and defend one another with the same focus and perseverance that has kept this land viable despite history’s shower of invasions, oppressions and sufferings to fight today’s challenge and pains.

The pope has praised this country of “Morning Calm” with its rich culture and heritage. But what brought him to this part of the world was the undeniable fact that Korea today is far from a calm nation. He chose the Korean Peninsula as his first Asian destination because of the universal message in the historical pains the land has suffered.

This land has witnessed some of the biggest turbulences of human civilization over the last 150 years. Catholic beliefs have given courage and relief to many of our people over the years to combat these struggles.

The hermit kingdom Joseon Dynasty was most harsh and cruel against Catholics. Over 20,000 were killed. It was a land of suffering. Then it was disgraced and devastated by a colonial rule of 36 years. Then it was cut in half - the land and people torn apart after a war that killed 2 million. Finally, it became a land of miracles. It recovered from the rubble of war and built an industrial empire and economic wealth. No other land has weathered oppression, sufferings, division and such a miracle of rebirth. Few back in the late 19th century could have imagined the Land of Morning Calm becoming a hotbed of all the tumultuous events of modern world history.

Many have offered words of peace and hope to the people of this land. But none were as moving as the language the pope used. His speech and writings came across more sweetly and beautiful because they came from a person humble in every way. A father of a teenager lost in the sunken Sewol who is on a hunger strike demanding a thorough investigation of the tragedy wept in the bosom of the pope. The pontiff selectively reached out and touched the unemployed, the weary youth in futile search for jobs, the abandoned elderly and disabled. As he blessed the pained and afflicted, every man and woman on this land shared the blessing and atonement. That was why we felt so calm, safe and happy in his presence.

How have we become so vulnerable, yearning, and emotional before a papal visitor? Why did we need his words to console and forgive ourselves? We were barren and hungry because we received none of those comforts from our own politicians, religious leaders and intellectuals. Pope Francis preached peace and reconciliation to this divided people and sundered land. He urged us to unite to heal our own scars from divisions. No one else can do the actual healing and saving. That is our own undertaking. We were awakened and shown the way. Whether we heed his words or not is up to us.

* The author is a professor of sociology at Seoul National University.