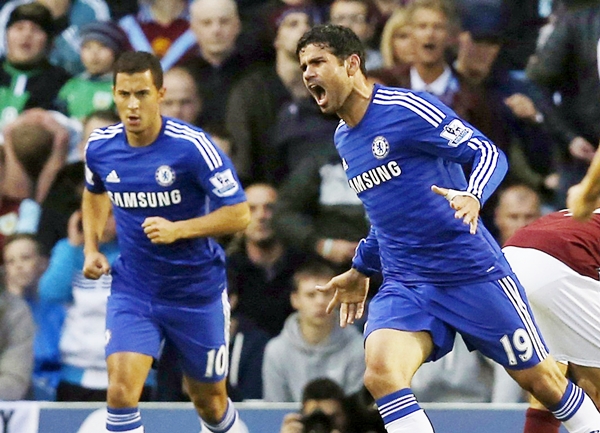 New signings Diego Costa and Cesc Fabregas made an instant impact for Chelsea as they launched their Premier League title bid with a confident 3-1 win at newly-promoted Burnley on Monday.

Former Arsenal midfielder Fabregas, brought in from Barcelona, was influential throughout the game, having a hand in all three Chelsea goals and striking up an impressive midfield pairing with Eden Hazard.

Chelsea recovered from conceding a 14th minute goal, quickly turning on the style in an impressive half hour spell to go in 3-1 up at the break.

Jose Mourinho’s side was content to see out the game in the second half as Burnley, tipped by many for relegation, put in a credible display after the Londoners had threatened to run away with the game.

“I think we had a good reaction and the first part of that is that emotionally, we were not affected by the goal we conceded,” said Mourinho. “We kept playing according to the way we want to play, the players were calm and never lost their composure and after that we had a fantastic 20-25 minutes with three goals, the second one a fantastic goal, and in the second half we had control of the game.”

In a fiery atmosphere, the home side took a surprise lead with a superb drive from Scott Arfield after a fine run from Matt Taylor.

But any hopes the capacity home crowd at Turf Moor had of witnessing an upset were quickly dashed as Chelsea showed why so many bookmakers have them as favorites to win the title this season.

Three minutes after Arfield’s strike, Brazilian-born Spanish national Costa, an offseason signing from Atletico Madrid, brought the Londoners level, firing in after a Branislav Ivanovic cross shot, following a Fabregas back-heel, had come out off the post.

Burnley looked shell-shocked and manager Sean Dyche had to be disappointed with the slack defending on Chelsea’s third goal, as an unchallenged Ivanovic slotted in a Fabregas corner in the 34th minute.

Mourinho raised some eyebrows by opting for Thibaut Courtois over Petr Cech in goal and the Belgian showed his quality shortly after the break to deny Arfield a second on a curling shot that he tipped wide.

Lancashire club Burnley, whose entire squad cost just a fraction of Costa’s reported 32 million pound ($53.5 million) transfer fee, can take some heart at the way they applied themselves after the break, even if they rarely threatened to alter the scoreline.

Chelsea brought on Didier Drogba for his first official appearance of his second spell with the club as a late substitute to the delight of their traveling supporters.

Dyche said his team could only learn from playing against a top quality opponent so early in the campaign.

“There has to be a reality to what we are hoping to achieve this season. I think they are top of the market or certainly up there,” he said. “Overall, I felt we kept going, which was important. That mentality will be important over the course of the season.”