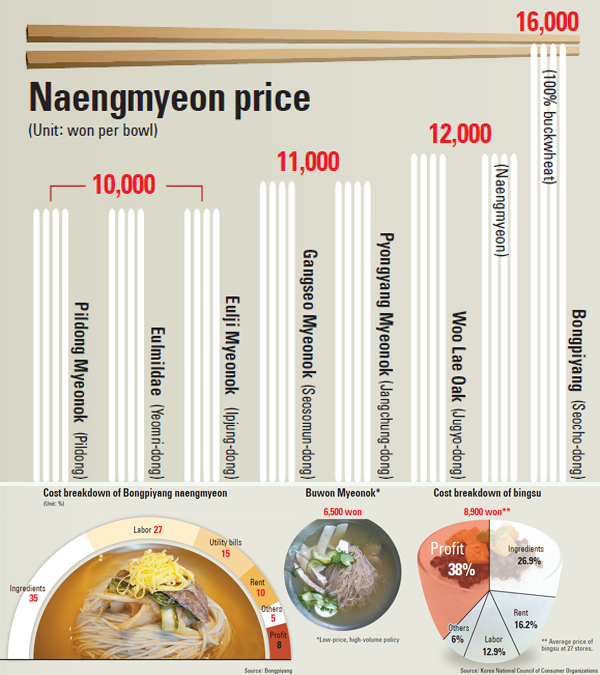 Park Moon, 77, is a regular customer at Eulmildae, a well-known restaurant in Yeomri-dong, western Seoul, known for its naengmyeon, or Korean-style cold noodles. On a recent visit, Park was surprised and disappointed that the price of a bowl of naengmyeon had gone up from 8,000 won to 10,000 won.

“Dishes like naengmyeon and nokdujeon [mung bean pancake] at this restaurant are comfort food to me because they remind me of my hometown,” Park said. “But I’m not sure if I’ll be able to visit as often as before because of the high prices.”

Many consumers have noticed this summer that the price of naengmyeon, a popular dish especially in the heat, has reached an all-time high. A bowl of naengmyeon at well-known restaurants in Seoul now costs 10,000 won ($9.82) or more. In 2011, a bowl of cold noodles at Pyongyang Myeonok in Jangchung-dong, central Seoul, cost 9,000 won while at Gangseo Myeonok in Seosomun-dong, central Seoul, it was 9,500 won. Both places have increased the price to 11,000 won.

They are not alone.

“My budget when eating out is 7,000 won per meal,” said Lee Seung-min, a 28-year-old office worker. “Naengmyeon has now become a luxury to me. In the past, naengmyeon was considered something of a common dish for people to enjoy without worrying about money. Now it’s become a dish only affordable by rich people.”

There are also complaints that the price increases have no good rationale behind them.

“Most popular naengmyeon restaurants that have been operating for 30 to 40 years own their premises so they don’t have to pay rent,” said Kim Jin-kwon, a researcher at the Korea Food Service Industry Research Institute. “They purchase ingredients in bulk so they get them at relatively cheap prices.”

A worker at Buwon Myeonok, a naengmyeon restaurant inside Namdaemun Market known for its 6,500 won cold noodles, said, “Because we own the store we don’t have to pay rent. This enables us to run the restaurant based on a low-price, high-volume policy.”

In March, the Korea Food Service Industry Research Institute conducted a study into the economics of 20 popular naengmyeon restaurants in Seoul. The study showed that 32.94 percent, or 3.22 million won, of their monthly average sales - 9.79 million won - was spent on purchasing ingredients.

According to the study, the cost of ingredients for a bowl of naengmyeon priced at 7,000 won is 2,300 won.

The study showed that even when excluding ingredients, labor costs and rents, the restaurants made an average profit of 2.31 million won every month. Analysts note that price increases are part of the process of making Korean food more fancy.

“The controversy over the price of popular dishes like bibimbap [rice mixed with vegetables and meat] and naengmyeon is inevitable as Korean food tries to be considered a high-quality meal,” said Yoo Ji-sang, a gourmet columnist. “It’s not right to criticize the price of naengmyeon when a bowl of Vietnamese rice noodles or pasta cost 20,000 won or more.”

Meanwhile, there is also controversy over the price of bingsu, shaved ice flakes, a popular summer dessert in Korea. Bowl of bingsu are selling for more than 10,000 won at many coffee shops. For example, an apple mango bingsu at Artisee is 16,000 won while a bowl of New York cheesecake bingsu at Cafe Bene is 13,500 won. A mango bingsu at Angel-in-Us coffee shop is 11,000 won while a tiramisu bingsu at Twosome Place is 10,500 won.

According to the Korea National Council of Consumer Organization, the price of bingsu is more expensive at coffee shops. The organization conducted an analysis into 27 different brands in June, and it showed that the average bingsu price at coffee shops including Cafe Bene and Angel-in-Us was 9,341 won and only 8,950 won at dessert cafes like Baskin-Robbins. The average bingsu price at bakeries like Paris Baguette was 7,846 won and 7,750 won at bingsu stores like Sulbing.

“Bingsus that are sold at coffee shops are normally for two people,” said an official from the organization. “Although the size is larger than bingsus sold at other bakeries and dessert places, the price is more expensive. They sell large bingsu at high prices to maximize their sales in the summer, but this infringes on the right of choice and convenience for consumers.”

The organization also noted that the profit margin on bingsu at coffee shops is about 40 percent.