Kim Woo-choong, former chairman of Daewoo Group, which was the second-largest conglomerate in Korea until the late 1990s, claims in a new book that his group went bankrupt largely due to government regulations.

“Daewoo Motors was handed over to U.S. General Motors almost for free while we were having conflicts with government officials over measures to overcome the Asian financial crisis,” Kim says in the book, which he co-authored with Shin Jang-sup, an economics professor at the National University of Singapore. The book, “Conversation with Kim Woo-choong: The World is Wide and There Are Many Things to Do,” will be released Tuesday.

In the book, the 78-year-old former business mogul talks about Daewoo’s rise and fall, problems with the International Monetary Fund’s bailout program, and his recent plan to raise what he calls “Kim Woo-choong’s kids.”

The book will be the first time that Kim has revealed stories about the group’s downfall in the 15 years since it went bankrupt and is likely to have quite an impact on the local business community. At the time, many said it was Daewoo Motors’ fault for increasing its overseas investment too rapidly. As the automaker faced a lack of cash, the group pursued a partnership with GM but was rejected.

Kim argues in his new book that the government’s regulations on liquidity put Daewoo at stake. In 1998, the Financial Supervisory Service (FSS) had a ceiling on how many corporate bonds a company could issue. Stranded by the regulation, rumors spread that Daewoo was in a state of emergency and financial investors withdrew their money.

Former deputy prime minister for the economy, Lee Hun-jai, who was the FSS governor at the time, said in his autobiography that Daewoo lost the market’s trust because it was passive about restructuring. Kim rebutted Lee’s argument, according to former executives of Daewoo Group, implying that there were conflicts between Kim and government officials over Daewoo’s fate.

“The Korean economy was stuck in sluggish domestic demand and investment for 15 years because of the IMF’s bad decisions,” Kim says in the book. He said the organization’s harsh austerity measures took away the unique vitality of Korean businesses. 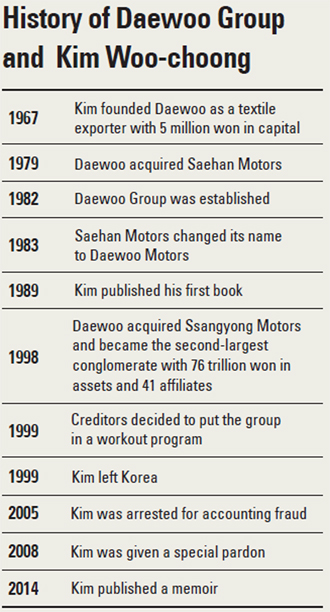 “The fastest way to overcome the crisis is to ramp up exports significantly,” Kim used to say in the 1990s.

But the Korean economy was able to end its IMF bailout program earlier than planned.

Daewoo Group owned 41 affiliates and 76 trillion won ($74.66 billion) in assets, including an electronics unit, and entered a debt workout program in 1999 after the Asian financial crisis. The group sold its unprofitable units and focused on a few key products, such as washing machines and refrigerators.

In 2006, Kim was sentenced to eight years in prison after being convicted of accounting fraud and was also fined 17.9 trillion won. But he was given a special pardon in January 2008.

Kim founded Daewoo with 5 million won in capital and five employees in 1967. Five years later, the company was the second-largest exporter in the country. Daewoo acquired Tong Yang Securities in 1973 and Sambo Securities in 1983 to be merged into Daewoo Securities. It also bought Daewoo Electronics in 1974. However, this aggressive expansion was the start to the accounting fraud and bankruptcy of the group, according to market watchers.

Since 2000, Kim has spent most of his time in other countries, and there were rumors he was trying to avoid charges related to the group’s bankruptcy.

He has been staying in Vietnam since 2008, focusing on rearing future business leaders. The Daewoo Sky Institute, a private organization for business seminars among former executives and employees of Daewoo Group, runs a program in Vietnam and Myanmar to encourage young businessmen called “global young business managers” or “Kim Woo-choong’s kids.”

“The purpose of the book is to reveal past facts as they are,” said Chang Byung-ju, chairman of the Daewoo Sky Institute. “Daewoo was not a culprit of the financial crisis but the biggest victim.”