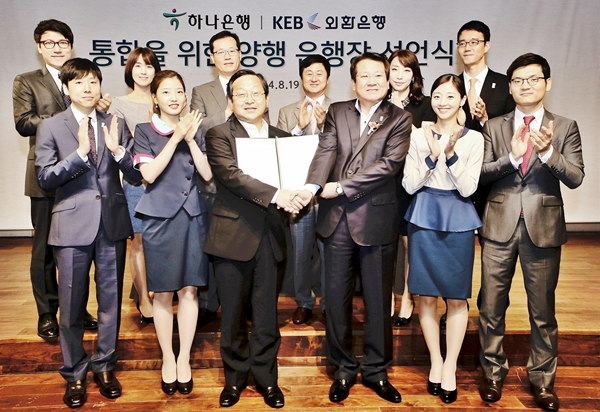 Hana Bank President Kim Jong-jun, center left, and Korea Exchange Bank President Kim Han-jo hold a joint agreement to pursue a speedy merger between the banks while surrounded by employees from both banks during a ceremony held at Shilla Hotel in Seoul yesterday. Provided by the banks

The heads of Hana Bank and Korea Exchange Bank announced a joint statement agreeing on an early merger of the two banking units under Hana Financial Group yesterday.

However, KEB’s labor union continued to oppose the speedy merger, which could lead to a massive strike.

“To overcome the organization’s crisis and to secure future growth, a merger is necessary,” the joint statement read. “Along with the merging process we will continue our sincere cooperation with the labor union,” the statement added.

The joint statement by Hana Bank President Kim Jong-jun and KEB’s President Kim Han-jo was made 50 days after the issue was brought up in earnest.

The two banks agreed to start the process, which includes the approval of its board members.

Both banks will hold board meetings next week to get the approval from outside directors. The banks will then form a committee devoted to the merger and later seek the approval of the Financial Services Commission.

The banks are also planning a shareholders meeting next month to speed up the process.

“As discussion of the merger has already started, there’s a need to preemptively prevent any confusion within the organization,” said a Hana Financial Group official who requested anonymity.” We came to the conclusion that insecurity will only build if we lose the opportunity while waiting for the labor union.”

Opposition to an early merger by the union was clear.

The KEB labor union expressed its disapproval in a statement released after yesterday’s joint statement.

“Management is manipulating the public as if there is a group of employees within the bank supporting the merger when those employees have been forced to do so,” the union claimed.

On Sunday KEB released a statement saying that some of its employees including heads of branches and those transferring to the credit card unit are supporting an early merger.

“The Feb. 17 [2012] agreement is not subject to negotiation,” the union said in the statement. When Hana Financial Group purchased a majority stake in KEB in February 2012, it guaranteed independent management until 2017.

The KEB union added that it will hold a rally of union members from the greater Seoul area in front of the bank’s headquarters in downtown Seoul.

Early last month, Hana Chairman Kim Jung-tai raised the issue of an earlier merger citing difficulty in the banking industry due to strong competition from major players such as KB Kookmin Bank, plus low interest income and rising costs.

Both banks didn’t perform too poorly in the first half. But Shinhan Bank reported the biggest operating profit among local commercial banks at 1.4 trillion won during the same period.

In terms of revenue, KB Kookmin Bank outpaced the competition with 8.2 trillion won.