HWASEONG, Gyeonggi - Kia Motors, the nation’s second-largest automaker, yesterday released its all-new Sorento, saying that it is confident in the quality of the midsize sport utility vehicle after it passed thorough inspections at the global quality center in its Hwaseong plant.

The latest Sorento, which goes on sale next Thursday, is the first model that has been inspected and certified by the center, which began operating this year. Before mass producing the new Sorento, Kia said that it test drove the vehicle 1.1 million kilometers, the equivalent of driving around the Earth 24 times.

The new Sorento is the third to have been redesigned in the past five years. Since its debut in 2002, the Sorento’s global accumulative sales have surpassed two million units.

Kia is betting big on the latest Sorento as the company is the only local automaker that hasn’t posted a domestic sales increase this year. For the first seven months, the affiliate of Hyundai Motor Group sold 261,069 units on its home turf, down 2.6 percent from a year ago.

Kia has been saying that it can turn the tables in the second half with its Carnival minivan that was released in June and the new Sorento, of which the company is aiming to sell about 5,000 units per month in Korea. Domestic sales of old Sorento models in the first seven months of this year were at 11,868 units, down 24 percent from a year ago.

“We have received 5,000 pre-orders in the past four days [for the new Sorento],” said Cho Yong-won, Kia’s vice president for domestic marketing. “We are expecting to see sales momentum with Carnival and Sorento, while the internal atmosphere is getting better and more confident.” 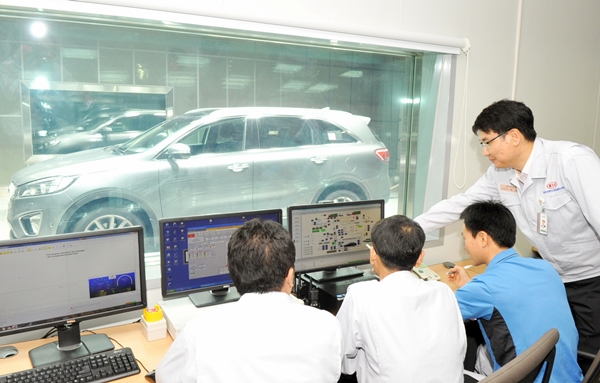 Kia Motors’ global quality center located at its Hwaseong plant in Gyeonggi. Provided by the company

Kia said that the new Sorento, which is bigger than old models, also has improved safety and driving performance.

The automaker said that 53 percent of the new Sorento’s body is made with advanced quality steel - which has tensile strength of about 60 kilograms per square millimeter - up 29 percentage points from the previous edition. The use of structural adhesives also increased by 123 percent from the old Sorento, which Kia said improved the body’s strength by more than 10 percent.

To improve the driving performance, Kia said that it adjusted the rear shock absorber to make driving on bumpy roads more comfortable, and it also made its rear suspension structure compatible with four-wheel drive.

The new Sorento is 4.78 meters (15.6 feet), which is 95 millimeters longer than the previous model, and the wheelbase has been increased by 80 millimeters to 2.78 meters.

“The Sorento is a global-selling model and in the U.S. market, the car is between the compact and midsize categories so it can cover both,” said Park Sang-hyeon, Kia’s RV product manager.