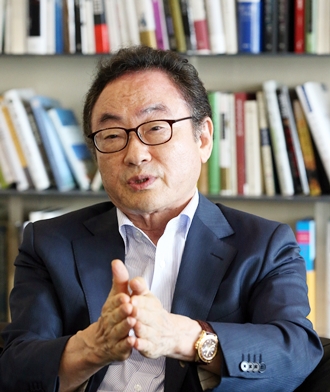 SaKong Il, Chairman and CEO of the Institute for Global Economics By Choi Jeong-dong

Market expectations are high for the stimulus plan from Finance Minister Choi Kyung-hwan’s economic team. Choi, who also serves as the deputy prime minister, often speaks of the “road not taken,” which suggests policy direction is a concern to others as well.

They include SaKong Il, the chairman of the Institute for Global Economics, who argued in an interview with the JoongAng Sunday earlier this month that a primary goal should be determined first before detailed policies are made.

The 76-year-old economic guru, who previously served as finance minister and the presidential secretary of the economy, maintained that the new economic team should first establish a long-term plan for boosting Korea’s potential growth rate, adding that a “revolution in regulation” is needed across society for the sake of the country’s economic growth.

Choi’s plan to boost domestic demand is going in the right direction, though the real question is how the government will make that happen, SaKong insisted, calling for more aggressive measures to lower the pressure of household debt.

Q. The government seems to be focusing on an increase in private consumption. What do you think?

A. Boosting domestic demand is ultimately done through investment and consumption. The government is currently emphasizing consumption. This comes from a belief that if consumption increases via increased household income, investment will follow. The government is asking companies to raise wages and expand dividends so that it may lead to household consumption. If the benefit of these measures go to households that are comparatively wealthy and have less marginal propensity to consume, the policy effect will be limited. I’m concerned that our attempt to improve potential economic growth could backfire. Choi described the stimulus plan as “the road not taken,” but I think it should be carried out with a road sign ahead. The public must also be persuaded. Now that the by-elections are over, we can see now that the public expects politicians to cooperate to bring about economic recovery.

The new economic team should provide a vision and a main direction. And we can pursue economic growth from that frame. [The outline] should establish measures for boosting domestic demand. It isn’t right that policy is focused on short-term stimulus without an overall picture.

What do you think about the government’s idea of utilizing corporations’ internal reserves?

We need to remember that our big corporations have actively invested abroad rather than at home in the past few years, and direct foreign investment to Korea was very poor compared to competing countries like Singapore and China. So what we need to do first is analyze why local and foreign companies were reluctant to invest in Korea. We must find the reason first and then remove barriers for investment. Even if the government blocks investment, companies will make investments anyway if profits are met. In terms of enhancing our growth potential, the use of a company’s internal reserves should not focus on penalties but on giving incentives.

Some people wonder why Korea can’t take aggressive measures like Japan has done with “Abenomics.”

Our situation is different from Japan’s, where Abenomics was inevitable. Japan faced deflation after bubbles in real estate assets collapsed, but Korea is not in a long-term slump or is experiencing deflation like Japan. However, there is still the opinion that we should follow the Bank of Japan’s quantitative easing. But this quantitative easing is an unconventional method when conventional methods, like using interest rates, aren’t available or don’t work. We still have the choice to adjust interest rates, so it’s not the right time to discuss quantitative easing.

According to a report from the Organization for Economic Cooperation and Development (OECD), Korea’s potential growth rate could be lowered as much as 0.55 percent by 2031, and it warns that growth could essentially halt in the near future. Is there a way to increase our potential growth rate?

First, there is a limit to expanding our labor force because our population is getting older and working time is being reduced. However, we have one more card to play: using women in the work force. Of course, there have to be various policies in place to make that happen.

Additionally, we also need to think about immigration policy in the long run. Having flexibility in the labor market and establishing a productive labor-management relationship must be emphasized.

After that, we need to improve investment conditions for companies. We need to remove various regulations that block investment. However, regulations for people’s safety and livelihood must be tightened. Korean companies prefer overseas investment, so we need to ask them why they are going abroad and fix that. Policy makers should closely communicate with investors because it is difficult to have good policy without listening to voices in the field.

Lastly, we need to make an effort to boost economic efficiency in general, pushing our system according to global standards. If you look at how the Sewol ferry tragedy began and how it is being dealt with, you can see that the need for a national overhaul is understandable. If the Park Geun-hye administration pushes for this ... I think our potential growth rate can be raised at least 1 percentage point. It’s a matter of how much commitment the government can consistently put toward its policies.

The government called for a “revolution in regulations,” but there have been no noticeable results. How should we pursue this? What regulations can be removed first?

Let’s go back to March when President Park chaired the deregulation discussion. After marathon talks, there were some results, but this hasn’t led to follow-up meetings. The deregulation meetings over which the president presides should occur regularly and be fixed into the president’s schedule. Through these efforts, the government can express its strong commitment on deregulation both at home and abroad. Considering the characteristics of the regulations, it is a difficult issue for a single ministry to solve because it is overlapping. By sector, the service industry is where regulation issues should be solved immediately. By doing so, investment will increase, domestic demand will be boosted and there can be an increase in quality jobs.

But the president can’t only take care of regulations. What should the finance minister do?

The deputy prime minister [Choi], who has the president’s backing, should have a role in inspecting and adjusting the process. He should be the actual authority when it comes to adjusting the country’s long-term economic policy. This deputy prime minister, who has the power to determine the budget and strategy for government policy, has to show powerful leadership. However, it is difficult to execute deregulation on politically important issues.

The reason Japan suffered a “lost 20 years” is because there was strong political leadership that could implement necessary policies and pursue system restructuring. Therefore, President Park, with a strong commitment, should directly check and consistently analyze the deregulation issue.