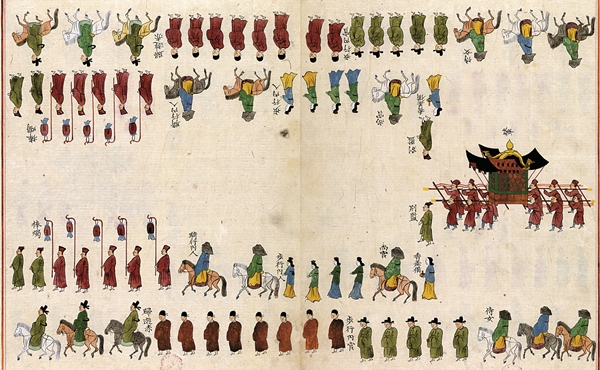 Japan returned the Uigwe, a collection of records, prescriptions and paintings of the royal Joseon rituals and ceremonies, in 2011. [JoongAng Photo]

A lawmaker’s analysis has revealed that the majority of ancient Korean cultural assets taken by Japan during its colonial rule that Korea has reclaimed over the past 10 years have remained neglected by the country’s authorities.

Ruling Saenuri Party lawmaker Han Sun-kyo, a member of the education, culture, sports and tourism committee at the National Assembly, found that the Korean government has so far designated only five, or 0.1 percent, of 4,732 pieces of ancient cultural assets taken back from abroad in the past decade as national treasures, despite their rarity and historical value.

Cultural properties designated as National Treasures, the rarest or most valuable, and Treasures, of lesser but still significant value, are supposed to receive greater protection and care.

Among the assets found to be left unattended include the Uigwe, a collection of records, prescriptions and paintings of the royal rituals and ceremonies during the ancient Joseon Dynasty (1392-1910).

Korea reclaimed it in December 2011, almost 90 years after it was taken by Japan, to mark a century since its annexation of the peninsula.

Although the Uigwe’s historical value was recognized in June 2007 on Unesco’s Memory of the World register, Korean cultural authorities have yet to designate it as a treasure or national treasure, only leaving it to be displayed at the National Palace Museum of Korea, Rep. Han said.

The same is true of the royal seal that belonged to Queen Gonghye, the wife of King Seongjong of Joseon, which is assumed to have been stolen by an American solider during the 1950-53 Korean War.

Even though a Korean civic group went so far as to buy it in an auction and donate it to the Korean government in 2011, it remains undesignated as a cultural treasure.

Buddhist monk Hye Moon, the president of a cultural organization known as Restoring Cultural Properties in Their Rightful Place, who spearheaded the operation to reclaim the Uigwe, said he sent a petition to the Cultural Heritage Administration (CHA) but has not received a reply.

“An investigation into the Uigwe is still under way, given its ample quantity,” said an official with the administration. He pledged to proceed with treasure’s designation “soon.”

Rep. Han also pointed out that Korea tends to be stingy about exhibiting its cultural legacies to the public.

Although the National Museum of Korea keeps 1,510 pieces, or 31 percent of all the cultural properties that have been reclaimed since 2004, only 219 have been displayed in exhibitions.

“Korea needs to show that it is able to manage the cultural assets it has reclaimed well if it wants to regain the additional 130,000 that remain overseas,” Rep. Han said.