Heroes slugger has sights set on 50

Heroes slugger has sights set on 50 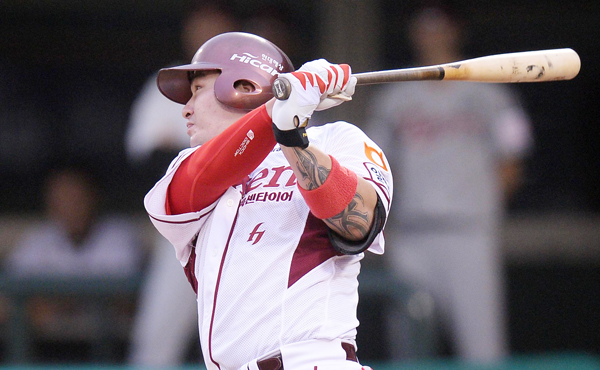 Nexen Heroes slugger Park Byung-ho is aiming for 50 home runs after becoming the first player to hit 40 in the Korea Baseball Organization since 2010.

Against the LG Twins at Mokdong Stadium in western Seoul on Tuesday, the first baseman blasted a 143 kilometer per hour (89 mile per hour) fastball from starter Ryu Je-guk over the right-field fence in the first inning.

That made him the first KBO player to hit 40 in a season since Lee Dae-ho of the Lotte Giants, who now plays for the Softbank Hawks of Japan.

Only 10 other players have accomplished that feat in the history of the KBO.

If the right-handed hitting Park, who blasted more than 30 round-trippers in each of the past two seasons, gets 10 more home runs, he would become only the third KBO player to hit 50 in a season.

Considering that Park has had better numbers in the second half of the previous two seasons, the 50-homer goal seems within his reach.

“I started to struggle in June and July, as I was thinking too much about a new record after people around me kept comparing me to Lee [Seung-yeop] of the Lions,” said Park. “I tried to concentrate on the game more than just hitting home runs, and I think that was the moment I started swinging the bat better.”

During the 2012 season, when he won the home run title for the first time with 31, he started with 17 homers in 79 games and finished strong with 14 homers in 55 games.

“I’m proud that I have been mentioned along with the some of the greatest hitters in KBO’s history,” said Park. “Now I want to reach another big milestone during the remainder of the season.”

In order to do that, he will need 10 more home runs in the 26 games that remain as of Tuesday.

“I think he definitely has the power and the ability to hit 50 in a single season,” said Jang Jong-hoon, Hanwha Eagles hitting coach, who was the first KBO player to hit 40 or more home runs in a season (41 in 1992). He was the KBO home run king for three consecutive seasons from 1990 to 1992.

“But just like he said, he needs to focus more on the game itself and stop thinking about setting a big record,” Jang said.