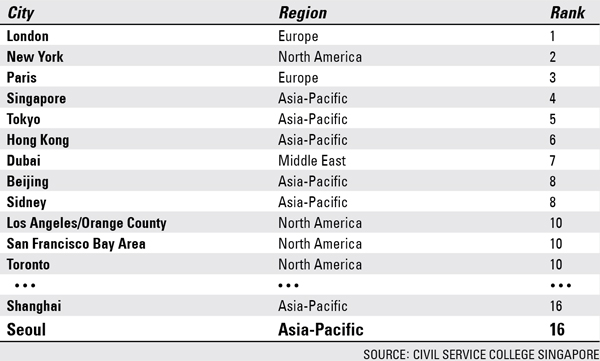 London is the world’s most influential city, according to a study reproduced in Forbes magazine. As a resident of the British capital for a quarter of a century, that’s both flattering and a little worrisome. Moreover, the ranking presages a very different world order in the years ahead.

Joel Kotkin, a senior visiting fellow at Singapore’s Civil Service College who co-authored the study, based the rankings on criteria including population diversity, foreign investment, number of company headquarters and how many other global cities you can fly to at least three times a week.

Counting by region shows two European cities, four from North America, five from Asia Pacific and a single Middle East contender, Dubai. Latin America’s best showing is Mexico City, in 41st place. “In part the prisoner of geography, Latin America is generally too far from the economic centers of East Asia and Europe and, with the exception of Mexico City, not very close to North America either,” Kotkin writes. Argentina’s default debacle, whether you blame the government, the hedge funds or the U.S. courts, is hardly an encouraging development.

Africa remains another also-ran. Johannesburg makes it into 31st place, with Lagos sneaking into the top 50 at 47th. “The problems of Africa reflect those of much of the developing world outside a few Middle Eastern cities - insufficient sanitation, political instability, and inadequate infrastructure - unacceptable for a successful 21st century global city,” according to Kotkin. The optimist in me hopes that recent evidence that the U.S. government is waking up to the region’s investment potential might turn that around, but it won’t be a swift transformation.

New York only just misses out on the top spot; its dominance in investment banking, hedge funds, equity trading, media, advertising, music, fashion and luxury all make it pretty much unassailable on the global stage.

Nevertheless, it’s the bunching of Asia-Pacific cities in the middle of the table presages the future winners. “Ultimately, the likely dominant global city will arise from China,” Kotkin says. He tips either Shanghai or Beijing to “achieve primary global cities status” in the next decade or two. It’s hard to disagree.

I worry that the United Kingdom’s political leaders underestimate how much of London’s influence derives from the country’s accidental geographical status as a bridge between Europe and the United States. There’s a clear and present danger to London’s status as a rainmaker: Its leaders are increasingly willing to play fast-and-loose with its role as an EU member.

Jared Diamond detailed in his Pulitzer-winning book “Guns, Germs and Steel” how Eurasian societies benefited from the positive feedback loop among weapons, logistics and the vagaries of disease; for post-empire London, you could add the happenstance of a convenient time zone.

It’s almost 18 years since Newsweek magazine’s “London Rules” cover trumpeted the triumphs of what came to be dubbed Cool Britannia. Two years after that, though, the magazine ran an “Uncool Britannia” piece illustrating how little of the capital’s glamour had been distributed across the rest of the nation. London as a city-state is great for the capital city, terrible for the rest of the country. There needs to be greater decentralization, even if that saps a little of London’s swagger on the global stage.

I’ve visited seven of the nine cities that London beats on the list’s top 10, and I wouldn’t swap for any of them. Asked where an ambitious graduate should think about building a career, however, my advice would be simple: Go East, young person.