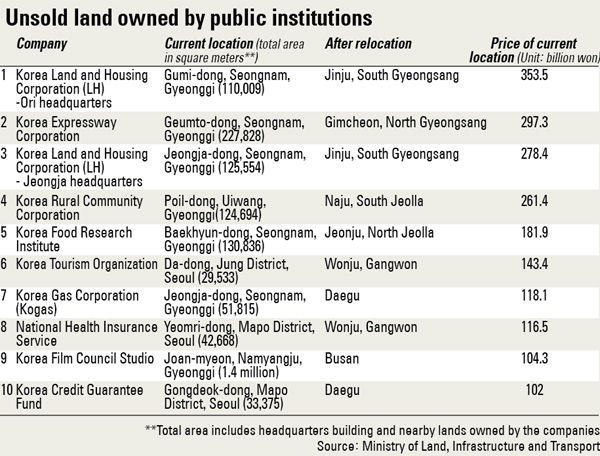 These relocations were part of the government’s strategy to spread economic development out of the capital area and to regional cities. The idea was first brought up in 2003 by the late President Roh Moo-hyun.

Many public institutions are laboring under heavy debt loads and need to sell off their current properties before moving.

According to the Ministry of Land, Infrastructure and Transport, 48 parcels of land owned by public institutions still haven’t found buyers and they are worth about 5.6 trillion won ($5.5 billion) in total.

The problem is not location.

One of the Korea Land and Housing Corporation (LH) headquarter buildings in Seongnam, Gyeonggi, is located about five minutes away from the Bundang subway line’s Ori Station, and there are a CGV movie complex, two large discount stores - Homeplus and Hanaro Club - and a park nearby.

The 110,000-square-meter (27-acre) plot it’s looking to sell is considered a prime area, close to other well-developed districts like Bundang, Yongin and Jukjeon.

As LH is scheduled to relocate its headquarters to Jinju, South Gyeongsang, in October, the company is trying to sell the land and a building on it for up to 352.5 billion won.

LH originally planned to use the money for relocation and to pay off part of its corporate debt, which totaled about 11.4 trillion won as of February this year, the highest among all Korean public institutions.

But no buyer has come forward although the land has been on the market since 2010. Korea Expressway Corporation, scheduled to relocate to Gimcheon, North Gyeongsang, in October, is suffering similar problems. The company put its Seongnam-based headquarters on the market for 297.2 billion won, but no one wants to buy it. It may have to relocate and leave the Seongnam building empty.

“There have been purchase inquiries from time to time, but the deal was never sealed,” said a spokesman for the company. “Since this land is designated as part of a green belt, the tallest building that can be constructed here is a four-story one. This is the main reason no deal has come through.”

As of today, 74 plots or buildings owned by public corporations have been sold.

A total of 47 plots owned by public organizations haven’t found new buyers, which prompted the Land Ministry to hold a seminar for potential buyers recently.

A notable exception is the Korea Electric Power Corporation (Kepco), which has its headquarters in the middle of posh Samseong-dong, southern Seoul.

Analysts say it’s only natural that public companies are missing their deadline because the real estate market has been in a coma since the global financial crisis of 2008, and has only recently started to show signs of life. In addition, the government has failed to convince the market that investments of several hundreds of billions of won will ultimately be profitable.

Nine institutions including the Korea Research Institute for Human Settlements haven’t even been able to start construction on new headquarters outside of Seoul because they had no money to do so.

Some institutions decided to postpone their relocation. Instead of moving in October, LH is hoping to do so in December.

The Land Ministry says it will unveil a financial support plan for the moves, but some analysts worry that taxpayer money will just be wasted.

Some even question whether the public institutions are intentionally trying not to find buyers for the well-located Seoul and Gyeonggi headquarters by the deadlines so they can lease them out instead.