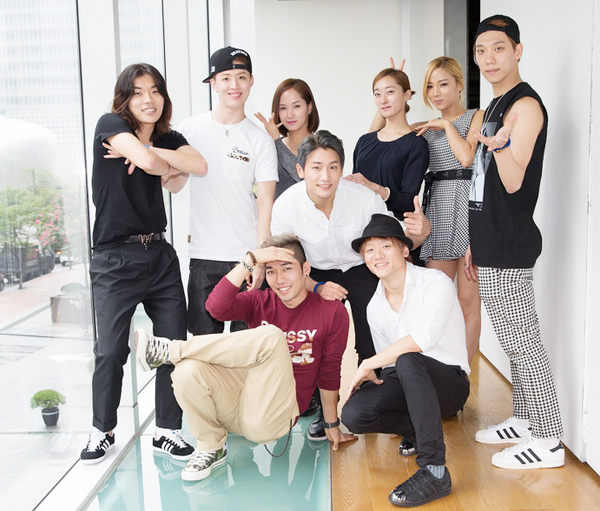 From ballerina Yoon Jeon-il, a former member of the Korea National Ballet, to B-boys Park In-su and Kim Ki-su, celebrities on YouTube, dancers specializing in various genres teamed up to create the type of performances rarely - or never - seen before.

After battling it out for the grand title, modern-dance expert Kim Seol-jin received the honor, along with his team Blue Eye, after a fierce competition against the nine members of Red Wings.

The winning team gathered on Tuesday at CJ E&M’s headquarters in Sangam-dong, northwestern Seoul, to share what they learned during the program and to discuss how the show will help them to develop their dancing careers.

Kim, the winner, revealed what he will do with his 100 million won prize money.

“I’m investing in having my own studio where I can work so that me and other dancers can talk about coordinating our performances,” said Kim.

“I’ll be working to make dance more appealing to the public so that more of us dancers can survive by doing what we love.”

Kim said that one good thing about the program was that the focus was solely on the dancers. He said that 15 years ago, when he was a back-up dancer, he was reprimanded several times by directors for looking directly into the camera. They made it clear that he was not the priority in the shot.

“But this program made me feel like I was in the center of attention, as camera directors encouraged me to look right at the lens and express myself,” Kim said.

“I really liked that feeling.”

Another contestant, Lee Ji-eun, who competes as a member of the Korea Sportsman Association, said that she learned to enjoy dancing through the show.

As a competitive dancer she was always aware that she needed to impress the judges, rather than allow herself to relax and just show what she’s got to offer.

“I was more used to performing a dance to win, but now I’m waiting for more chances to [collaborate with experts in different dance genres],” she said.

It wasn’t easy for the dancers to work with one another, but their struggle made the program more fun and humane to many audiences at home.

The winning team members are now gearing up for their final event. They will perform together in front of fans for the “Dancing 9 Gala Show” from Sept. 9 to 14 at the Universal Arts Center in Gwangjin, northeastern Seoul.

Tickets to the event are almost sold out as of yesterday with only a limited number of seats available for the six-day event.