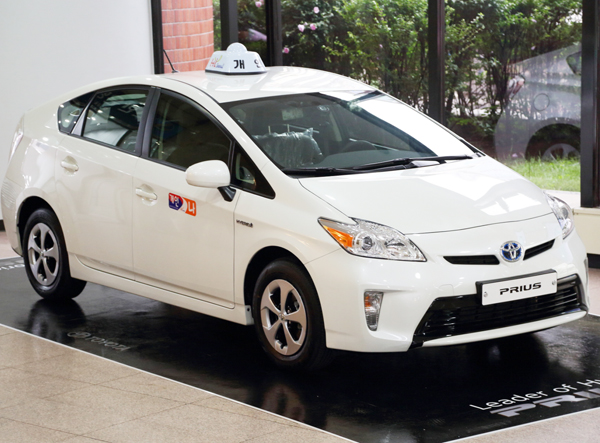 A Prius taxi is on display at Seoul Transportation Center in Sincheon-dong, southern Seoul. Provided by Toyota Korea

Toyota Motor Korea said yesterday it is offering a taxi version of its popular Prius hybrid for 26 million won ($25,400), nearly 5 million won off the sticker price, in a bid to expand its presence in the taxi market.

“We expect sales of Prius taxis to be an opportunity for our customers to become more familiar with our hybrids,” said Toyota Motor Korea President Akihisa Yoshida. “Ultimately, we aim to contribute to a clean environment through taxis, which play an important role in transportation.”

The company expects the Prius taxi will be popular with its impressive fuel efficiency of 21.7 kilometers per liter (51 miles per gallon) in city driving. It also emphasizes the quietness of the vehicle and safety features like seven SRS airbags.

The government recently made it mandatory for all taxis registered from Aug. 8 to have front-seat airbags.

Prius taxis are on the road in the United States, Japan, Singapore, Croatia, Austria and elsewhere.

Taxi operators are divided on the Prius. Although it gets great gas mileage, it costs nearly 10 million won more than other models.

According to this year’s Seoul Taxi Association survey of 159 companies, 26 percent said they consider fuel efficiency as the most important factor when purchasing a taxi, while 25.1 percent picked price.

Of 1,179 drivers surveyed on their No. 1 priority, 44 percent chose fuel efficiency, while 22 percent opted for improved safety.

More than 90 percent of Korean taxis use liquefied petroleum gas (LPG) due to tax incentives, but with prices for the fuel rising, other options are on the way. Subsidized diesel taxis are scheduled to be introduced next year, and some cities are trying to increase the number of electric vehicle (EV) taxis.

The Seoul Metropolitan Government recently said it is considering introducing EV taxis by the end of the year and reportedly is in talks with Renault Samsung Motors, which makes the nation’s only sedan-type EV, the SM3 ZE.

Seoul would be third city in Korea after Jeju and Daejeon to have EV taxis.

Meanwhile, Hyundai Motor yesterday announced a taxi version of its seventh-generation LF Sonata that gets 9.6 kilometers per liter (22.6 miles per gallon) and starts at 16.35 million won.

Hyundai and its smaller affiliate Kia have more than 90 percent of the taxi market in Korea.