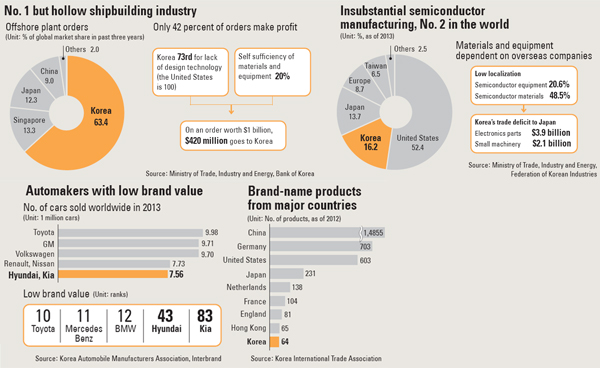 Capro was a company that grew with the Korean economy for the past 40 years, and accounted for 88 percent of the domestic market for caprolactam, a material essential to producing nylon.

Despite the decades of success, Kim Hyung-gil, director of Capro, the country’s only caprolactam manufacturer, had a somber look on his face.

The company, based in Ulsan, South Gyeongsang, posted a 112.7 billion won ($110.2 million) operating loss last year, as its exports to China shrank significantly. Capro earns 80 percent of its revenues from exports.

“We are doing our best. Please leave us so we can keep up the team spirit of our employees,” Kim told a reporter.

Although it is a delicate issue, the reality the company faces reflects a wider trend in the Korean economy and the manufacturing sector.

In 1969, President Park Chung-hee borrowed money from the Asian Development Bank and poured it into the construction of the Gyeongbu [Seoul-Busan] Expressway, Andong Dam and the establishment of Capro, formerly Korea Caprolactam.

The material was used to produce clothes, tires and plastics and the factory was so important that soldiers were stationed outside to guard it.

However, the company is now busy worrying about the low morale of its employees.

Recently, it dropped production at a second factory by 20 percent.

Capro is not the only company suffering as China becomes more self-dependent. A dark shadow has also been cast over Korea’s manufacturing giant Samsung Electronics.

In China, Samsung Electronics was overtaken by Chinese smartphone maker Xiaomi in the second quarter.

China is growing at a rapid pace and Japan is making more profit even though Korea is selling the products.

Japan also holds 70 percent of the market for silicon wafers, the thin discs used in semiconductors.

“Samsung exists today because the Korean government made the important decision to use code division multiple access, the digital technology used in mobile phones, when no one else did,” said Woo Chang-hwa, a professor at Gyeongsang National University’s Office of Academy and Industry Collaboration.

“The government must think desperately on how to create a new market.”

While the rapid growth of Korea’s manufacturing industry has been the envy of the world, many Korean manufacturers still have not made a name for themselves.

Besides Samsung Electronics and Hyundai Motor, not many brands are known globally.

Park Yong-maan, chairman of the 100-year-old Doosan Group, said that almost no one knew about Doosan overseas. So Doosan sponsored the British Open golf tournament.

Even manufacturers that are known outside of Korea are also struggling.

Hyundai Motor and Kia Motors have maintained their position as the world’s fifth-largest automakers and have ranked high in quality satisfaction. But Hyundai ranks 43rd for brand value and Kia ranks 83rd, according to Interbrand, a company that researches brand values. Interbrand ranks companies based on how well their top products sell, the strength of the brand and the role the brand plays in a consumer’s decision to purchase.

“Samsung lags behind Apple in terms of brand loyalty and behind Chinese electronics companies in terms of price competitiveness,” said Lee Kyung-mook, professor at Seoul National University. “The growth of mid- to low-end smartphones from Chinese manufacturers is posing a bigger threat to Samsung than to Apple, because Samsung has weaker brand power than Apple.”

Some companies are said to be the world’s best but their products would be useless if not for parts made by other countries.

For instance, Samsung smartphones would be useless if there was no operating system from Microsoft or Google.

Microsoft filed a suit against Samsung in the U.S. this month regarding patent royalties for its OS.

Since Samsung produces more than 300 million smartphones per year, it would have to pay $3 billion per year in royalties to Microsoft if the company wins in court.

Even if a Korean company has good sales, their profit is often low.

According to the LG Economic Research Institute, annual sales growth of Korean manufacturing businesses between 2010 and 2012 was 10.6 percent, placing it eighth among 36 major countries. The average growth rate of the 36 countries was 8.2 percent.

But their operating profit rate, which shows how much they earned from sales, was only 4.9 percent in 2012, putting Korea at 18th place.

According to Hyundai Research Institute (HRI), if the value of Korean exports is 100, it makes 60 percent profit. On the other hand, China takes 72 percent profit and Japan 83 percent.

“Even though exports rise, national income does not increase, because the core technology of manufacturing is lacking,” said a researcher at HRI.

Korean manufacturers have a weak base. Mass production is effective, but core materials are still from overseas, especially from Japanese companies.

Semiconductors are dependent on foreign companies for core materials and production equipment.

Last year, only 20.6 percent of semiconductor equipment was made locally.

For drydock shipbuilding and repairs, Korean businesses swept the top five spots. However, companies’ abilities to design offshore plants are so lacking that French advisers must live in the manufacturing area to help.

“There should be a virtuous circle, in which engineers get better treatment and excellent staff flock to manufacturing businesses.”