Reps at assembly get ‘bulletproof’ shields

Reps at assembly get ‘bulletproof’ shields 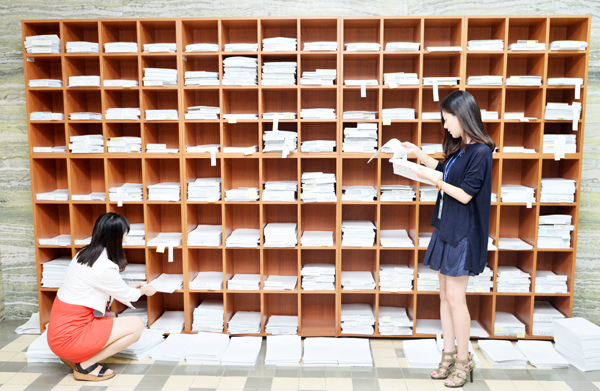 National Assembly administration workers set out pending bills Tuesday night, the last day of an extra session, at the National Assembly in Yeouido, Seoul. Due to a political deadlock over the special Sewol law, none of the bills were enacted in the session. The opposition NPAD demanded the opening of another extra session Friday in an apparent move to protect their lawmakers who are accused of corruption from being arrested by prosecutors. [NEWSIS]

All 130 lawmakers from the main opposition New Politics Alliance for Democracy (NPAD) demanded an extra session of the National Assembly at 11:59 p.m. Tuesday night, just a minute before Wednesday.

As a result, four lawmakers - three from the NPAD and one from the ruling Saenuri - will evade imminent arrest for receiving improper payments.

An extra parliamentary session for August will kick off tomorrow, just three days after the July session ended, since the motion had the required support of one fourth or more of the 300 lawmakers in the Assembly.

The opposition party’s action Tuesday night came just two hours after the prosecution asked courts in Incheon and Seoul to issue arrest warrants for four lawmakers on corruption or election law violation charges and take them into custody.

Criticism quickly emerged that the NPAD was trying to protect its lawmakers by taking advantage of privileges for congressmen, the so-called “bulletproof session.”

Korea’s lawmakers are exempt from arrest and imprisonment without the consent of the Assembly while any session is under way, a privilege designed to guarantee the independent activities of lawmakers from nefarious pressure from the sitting government.

Since the extra session for July wrapped up on Tuesday, the four lawmakers will have the “bulletproof” protection starting tomorrow after surviving a single day unprotected.

“[The NPAD] requesting an extra session when there was only a minute left - like a baseball player rushing to the home plate - is meant for a bullet- proof session,” said Kim Jae-won, deputy floor leader of the Saenuri.

“It was really wrong that the main opposition lawmakers tried to launch the bulletproof session after repeatedly pledging to give up all privileges.”

The NPAD claimed the request for an extra session was for the sake of passing the long-delayed special law to investigate the April sinking of the Sewol ferry.

But at the same time the party blamed prosecutors for their unexpected pursuit of its lawmakers.

“Thus far the three lawmakers have reacted smoothly to the prosecution’s requests and there is no fear of them running away,” said Cho Jung-sik, chief policy maker of the party.

“The prosecution asking for an arrest warrant in the middle of the night like it was exercising a hit-and-run raid is an outright suppression of the opposition party.”

The four lawmakers at risk of arrest are Shin Geh-ryoon, Kim Jae-yun and Shin Hak-yong of the NPAD and Park Sang-eun of the ruling Saenuri.

The former three are charged with receiving up to 70 million won ($67,980) from Kim Min-sung, who runs Seoul Art College, a vocational school for aspiring entertainers.

Park of the ruling party allegedly took illicit funds from candidates who attempted to run in the June 4 local elections or from regional CEOs in the construction industry in Incheon. The prosecution has been trying to discover the source of 630 million won in cash that was discovered in his son’s house during a raid in June.

The Seoul Central District Court yesterday issued arrest warrants to the two Shins and Kim, in addition to Cho Hyun-yong, a Saenuri lawmaker and former president of the Korea Rail Network Authority, who allegedly pocketed more than 100 million won from Sampyo E&C.

The court is also set to interrogate all of them before detention, a process to gauge the validity of the prosecution’s warrant request, today. The Incheon District Court is poised to question Rep. Park today.

Should the lawmakers refuse to show up in front of local judges, the prosecution may go far as to mobilize the extreme measure of constraint arrest.

That could lead to a repeat of ugly scenes from the past in which lawmakers are seen apprehended either at home or at workplaces. Analysts see a low chance of the lawmakers - particularly from the NPAD - appearing voluntarily.

“They refused to answer summons, citing various reasons. A bulletproof session that treats [lawmakers] differently from ordinary people should be done away with. We Saenuri will take the lead to promise not to do it.”

Rep. Kim Jae-won of the Saenuri proposed yesterday that lawmakers hold a plenary session on Aug. 25 for a single day within an extra session period of between Aug. 25 and Aug. 31 - if the NPAD really desired to take care of pending bills as it claimed.

A workshop with the participation of all of its lawmakers is scheduled today and tomorrow for Saenuri, which makes it practically impossible for the party to join the plenary session that would be held tomorrow under the proposal from the NPAD.