The Chinese amongst us

The Chinese amongst us 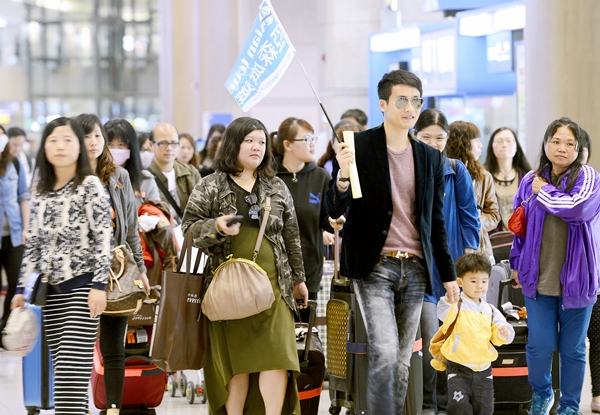 A group of Chinese tourists arrives at Incheon Airport in April ahead of a three-day Labor Day holiday. [NEWS1]


Sometimes, you realize how time has gone by and the world has changed. To me, the sight of Chinese tourists gives me a jolt. There are so many of them around. You don’t have to go to China to see a scene in which there are more Chinese people than Koreans. The streets of Myeong-dong are filled with Chinese tourists, and Chinese signs are all over department stores.

My morning stroll has changed drastically. On my walk from Buam-dong to Samcheong-dong, the entrance to the Blue House is always packed with Chinese tourists. I should say “dui bu qi” instead of “excuse me.” With so many Chinese people around us and supporting our economy, we clearly need to learn to live with them.

The problem is that that Chinese people have two faces: ugly and rich. It would be great if we only got to see the rich side, not the ugly side. But such is not the way of the world.

It is not so easy to live alongside the ugly Chinese. They are a nuisance even for the Chinese government. They leave graffiti on the Temples of Luxor in Egypt, ride the Charging Bull statue on Wall Street, and get kidnapped in Vietnam after flaunting their riches.

Last year, the Chinese government published a Guide to Civilized Tourism and Travel. The guide instructs tourists in how to wait in line, not to show off cash and follow and respect the culture and order of other countries. Also, a new tourism law was passed to punish those who leave graffiti on foreign cultural sites with a maximum detention of 10 days.

It gives us a small amount of consolation knowing that the Chinese tourists are not only acting rowdy in Korea. Nevertheless, Chinese tourists are often hard to bear. Let’s look at a few complaints sent to the Korea Association of Travel Agents. Last month, the Gyeongbok Palace Office wrote that Chinese tourists are littering, smoking and urinating in the palace and requested travel agents to advise tourists to respect a royal palace that is a symbol of Korea’s dignity.

Ewha Womans University’s complaint was even more serious. Chinese tourists have mobbed the campus and they disturb lectures by entering without permission, taking pictures and smoking in classroom. It’s been a couple of years since the university became a tourist attraction because the name Ewha sounds similar to “making money” in Chinese, and there is a superstitious rumor that taking a picture at the school would make them rich.

But we can’t just turn them away. Tourism targeting Chinese tourists is one of the most promising businesses for our future. The number of Chinese visitors to Korea is growing by 25 percent every year. This year, it will reach 5 million. The growing business created 240,000 jobs, four times the jobs created by the 47 largest Korean companies last year. Even more Chinese will visit Korea when a tourism industry reform plan announced by the government last week is implemented. Moreover, the Chinese are accustomed to acting in groups, and there is little room for individual common sense or judgement. Novelist Lu Xun described the Chinese people behaving like a swarm of bees. And when they start behaving ugly, bees act even more terribly as a group.

But we can’t just criticize them with too much superiority. We need to look back on our own past.

In 1994, the Bureau of Public Information published a book called “Ugly Koreans.” When Korea became economically prosperous in the 1990s, Korean tourists had bad manners abroad, especially in China. They drew graffiti on cultural assets, refused to wait in line, showed off money, shopped excessively and acted arrogant. The seed that the ugly Koreans planted in China 20 years ago may have come back to Korea. Sometimes, you do indeed reap what you sow.

How is behavior in Korea today? People no longer spit on the street, but there still are reckless motorcycles on our sidewalks, cutting of queues and foul language.

It’s not the time to condemn others. Maybe we can help change the ugly Chinese by leading by example.