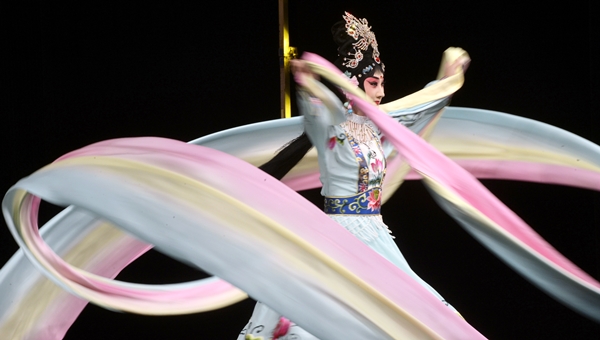 Actresses perform Peking Opera “The Goddess of Heaven Scatters Flowers” during a preview for media at Lincoln Center in New York City, the United States, Aug. 20, 2014. “120th Anniversary of the Mei Lanfang “project was kicked off here on Wednesday under the leadership of Mei Baojiu, son of famous Peking Opera master Mei Langfang to commemorate the 120th anniversary of Mei Lanfang and to promote the art of Peking Opera. [XINHUA]

The tour by the Jingju Theater Company of Beijing, with performances in New York and Washington, is timed to mark the 120th anniversary of the birth of China’s greatest opera star, Mei Lanfang, who introduced his art form to U.S. audiences nearly 90 years ago.

“This tour is special because it is by the particular troupe that is the direct artistic inheritor of Mei Lanfang’s art,” said Elizabeth Wichmann-Walczak, an expert on the art form who directs the Asian theater program at the University of Hawaii in Honolulu.

Mei Lanfang toured the United States in 1930 and is credited with revolutionizing the tradition of men performing female roles. He created a unique style known as the “Mei Lanfang School.”

“It was the first time that it was seriously introduced in the United States by an important artist and company,” Wichmann-Walczak said about the U.S. tour, adding that Mei Lanfang was celebrated by theater and film stars of the time.

His 80-year-old son, Mei Baojiu, one of China’s top opera stars, organized the program for the current U.S. tour, which follows in his father’s footsteps. It includes five shorter plays each featuring a major female character that would have been played by his father, and a full-length production.

“We want to let the American people understand that Mei Lanfang’s art is a unique form of drama that tells a story through song and dance. It represents and exemplifies Chinese Opera,” Mei Baojiu said in an interview.

“Bringing the Peking Opera to the United States not only provides an important cultural exchange, but also strengthens the China-U.S. relationship,” he added.

Peking Opera began developing at the end of 18th century and was recognized as the national form of theater in the 19th century as it spread throughout China.

“Every major city and province has a jingju company,” said Wichmann-Walczak. “It is a unique theater form. The actors are the major creators,” she added.

The actors traditionally composed the music, which is part of character interpretation, an created every aspect of the play.

“It is really a total theater form using all of the elements of the performing arts,” said Wichmann-Walczak.