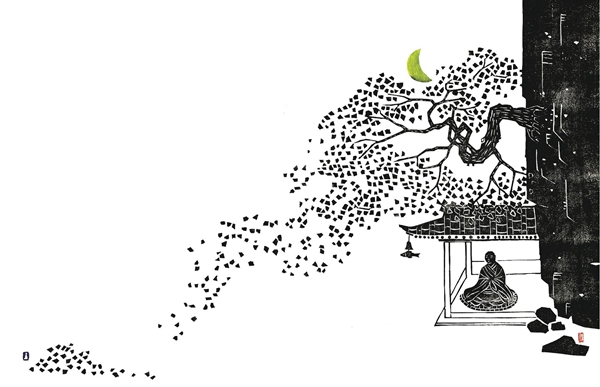 A wooden lithography insertion from the book “Finding the True Self.” Provided by Domin Sunim

DAEGU - After centuries of searching for harmony and inner peace, society continues to suffer from humanitarian crises and international struggles.

But one way to solve global discord is by encouraging the practice of Seon, a Korean method of meditation, Jinje Sunim told Ryu Kwon-ha, the Korea JoongAng Daily’s executive editor.

The sunim, or monk, is Korea’s jongjeong yeha - the religion’s highest honor given by traditional Korean Buddhism’s mainstream representative, the Jogye Order.

He says that finding inner peace can lead to achieving a sense of harmony with others, eventually resulting in world peace.

“Other meditation processes most of the time require a certain posture, time or location, and that means there are some limitations that could stop you from meditating,” the sunim said. “However, Seon doesn’t require you to be in a certain [place, time or posture], and you can just learn to meditate at any moment in your everyday life, which can help you become more mature mentally to see more peace and eternal happiness.”

Seon’s versatility is one reason why Seon has started to appeal to people outside of Korea in recent years.

“Since many are overwhelmed with too much information ... or with work given to them alongside with many conflicts they experience in their day-to-day lives, they must have been looking for some ways to calm themselves down,” said the sunim.

“In the process, they seem to have found some limitations from other meditation methods.”

The sunim has made numerous visits to the United States to spread Seon since first giving a sermon at Riverside Church in New York in 2011. And in an attempt to make Seon meditation more readily available in America and around the world, he has published his thoughts on Korean Buddhism in the English-language book “Finding the True Self,” which contains Buddhist teachings developed in Korea as well as the correct way to practice Seon meditations.

The book will be available in U.S. public libraries and also through literary retailers such as Amazon.com starting next month.

Ryu visited Donghwa Temple in Daegu, where the sunim is staying, to talk about why Korean Buddhism and Seon meditation is drawing in people from overseas.

Q. Why should people choose to meditate based on the teachings of Seon Buddhism?

A. It is important to spread the word about Korea’s Seon meditation as it is a way to reach inner peace. We cannot make individuals happy because they need to take the initiative and meditate in person. It’s ordinary people, not us, who will make the global community advance to nirvana when each of its members tries to find inner peace. 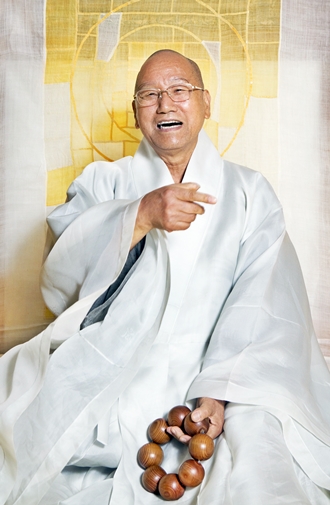 Jinje Sunim talks about why it is important to promote Korea’s Seon meditation globally at Donghwa Temple in Daegu. By Park Sang-moon


Was going to New York a start for you to spread the word of Seon meditation?

An attempt to spread the practice of Korean Buddhism has been ongoing for a long time. While individual monks or experts tried to do this in the past, the Jogye Order is now taking the initiative to promote its teachings. It has been about 40 years since many sunim tried to do this outside of Korea. Because they sowed the seeds even when it was difficult, now we have a chance to spread the teachings further.

Many religious leaders work in New York, so most religions are accessible in the city. It is almost like the city is a convention center of religions. But Korean Buddhism is relatively less known than the Buddhism developed in other countries, such as Japan. To be able to promote Korean Buddhism, we need to take some systematic measures to set up overseas offices. We also need to foster individuals who are fluent in foreign languages.

Is it difficult to train people to deliver Korean Buddhist teachings to the world?

[Besides language proficiency,] it is first and foremost that experts deliver core teachings in a correct way. But right now, there are many confused sunim who teach pupils without really teaching the legitimate way to meditate. We have a shortage of leaders who are both fluent in foreign languages and show talent in teaching properly.

Publishing the book was part of our effort to give a larger number of people the [right information] on Korea’s Seon meditations. We thought it was essential to get as many people as possible interested in it. The book can gather more leaders who can then spread the word about the idea.

There are many meditation methods out there, but the world is still full of so many different disputes that come from various causes, ranging from racial conflict to financial greed. Why do we still have these issues?

Individuals have their egos, which are not tangible or real. These fake identities create obsession and greed. That illusion means one can never be free from wanting to have something more and lose their good judgment. When they gain one thing, they want two, and when they get nine, they want one more to make it to 10.

When obsessions for possessions hit a pinnacle, people often stop thinking about living harmoniously with others. They disregard any other factors that may hinder them from obtaining what they’ve set their eyes upon. Greed from a small number of people results in public harm. If the world continues to be filled with such greed, mankind could eventually destroy itself.

How does Seon meditation help amend such issues?

It seeks to reach a point where your mind is only thinking about one thing. When you continue to meditate, you will be able to reach the point where you only focus on one greater idea, which is called hwadu. When that status is reached, people won’t try to put a label on what belongs to them and what belongs to others. I will become you; you will become me; and you and I will become we. From there, world peace can be achieved.

Then how do we choose hwadu?

You should go to an enlightened sunim so that you are given a question. I normally ask, “What was your true self before you got your body from your parents?”

You then try to focus on thinking about that one question and seek to find an answer. Seon meditation is about having people focus on one question, whether they are eating, sleeping or working, in their daily lives. You think about one idea until your other senses all come to a stop and focus on revealing your true self by continuing to ask that one question.

The book includes many interesting artworks. Is there any particular reason for this?

Since rarely known Korean Buddhist teachings could be difficult for people from overseas to understand, we thought inserting some paintings inspired by the religion would be one way to easily approach readers. While we were searching for the right art, we learned about wooden lithography, which expresses the beauty of marginal space well. We have gotten great reviews from readers about presenting Korean Buddhism alongside Buddhist art.

Do you plan to go abroad to present another teaching session?

I can’t answer every single request because of my age [he was born in 1934], but if enough people want me to speak again, I will of course respond to the invitation. Religious leaders need to take an initiative to ensure our descendants have a peaceful and happy life later on.