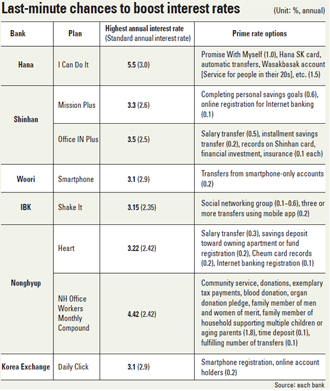 Park Hye-hoon, 25, recently opened an installment savings account at Hana Bank with a strikingly high annual interest rate of 5.5 percent. He was able to get such a good interest rate by taking full advantage of the prime rates offered by the bank.

Park’s savings plan is Hana’s “I Can Do It Savings,” which comes with a 3 percent basic annual interest rate. The plan adds on a 1 percentage point prime rate for customers who agree to make two of what the bank calls “Promises to Myself.” This can include putting up the Korean national flag, taegukgi, on national holidays, or giving up one’s seat for the elderly on public transportation. Park added another 1.5 percent to his interest rate by signing up for Hana N Wallet - a smartphone app for money transfers and payments - and automatic transfer services.

“I searched hard to find services that offer a higher interest rate, even as little as an extra 0.1 percentage point, in this period of low interest rates,” Park said. “I hurried to join because I heard the service would be available only until the end of this year.”

Even though interest rates at banks are already low, they are expected to drop further for installment and deposit accounts.

On Aug. 14, the Bank of Korea’s monetary policy committee decided to lower the key interest rate from 2.5 percent to 2.25 percent. Currently, the annual interest rate at a major commercial bank is in the mid 2 percent range, but has dropped to the 1 percent range for some products, which is a burden for people trying to build up their savings with interest.

So consumers like Park are on the lookout for plans that offer a higher interest rate. For example, Nonghyup Bank’s “Heart Savings” plan comes with a basic rate of 2.42 percent, but if customers have records of good deeds that they’ve done, they are eligible for an extra 0.3 percentage point per deed for up to six deeds.

At Nonghyup, good deeds include community service, donating to a charity, paying taxes on time, donating blood, being a registered organ donor and financially supporting aging parents or multiple children.

Also, if the user sets up a regular monthly deposit to his or her savings account or makes a set number of transfers to the account in a year, the interest rate will increase another 0.1 percentage point. Savvy savers who fully utilize all their options can get an annual rate of up to 4.42 percent. Similar rules also apply to Nonghyup’s “Heart” time deposit, which has a basic interest rate of 2.31 percent that can be bumped up to 3.01 percent.

For customers who use Woori Bank’s smartphone savings (basic rate of 2.9 percent), each transfer from a mobile account adds 0.2 percentage point to their interest. Korea Exchange Bank’s “Daily Click” installment savings (maximum rate 3.1 percent) or Industrial Bank of Korea’s “Shake It” installment savings (maximum rate 3.15 percent) also offer prime rates depending on factors like customers’ smartphone app usage or their social networking with other users that have the same monthly installments and payment dates.

One way to counter low interest rates is setech, a combination of the Korean words for tax and investment techniques, such as registering for long-term pension plans. Up to 12 percent of payments made to retirement plans, with a limit of 4 million won ($3,933) per year, can be given back in a year-end tax return.

But the earnings rates on pensions are not good. Most retirement pensions tend to be either plans that guarantee returns of principal and interest rates (92.6 percent), like a time deposit, or a defined benefit plan (69 percent) that returns a specified amount.

This year’s second-quarter earnings rate for retirement pensions are almost all in the 1 percent range.

“Those who only have deposit and installment savings should register for a limited plan with a high interest rate and focus on setech to utilize pension plans or monthly installments that are not taxed,” said Lee Young-ah at IBK’s private brand customers division.

In accordance with the government’s Feb. 27 announcement to reduce the nation’s household debt, tax deductions will expand starting next year to include people with fixed-rate loans that they must pay back in the next 10 years or more.

The income tax deduction limit was increased from 15 million won to 18 million won and the scope expanded to include loans that must be paid back over a period of 10 to 15 years.

Tax deductions on a loan of 100 million won with a 5 percent interest rate mean the actual rate will drop 0.4 percentage point. People who switch from a fixed rate loan to a variable rate loan within the first three years of borrowing will be charged a 1 or 2 percent commission fee.

“[For people] paying back over 10 years, a fixed rate is better considering the tax deduction benefits and the flexibility of future interest rates,” said Seo Jin-seop, head of Kookmin Bank’s loan services department.