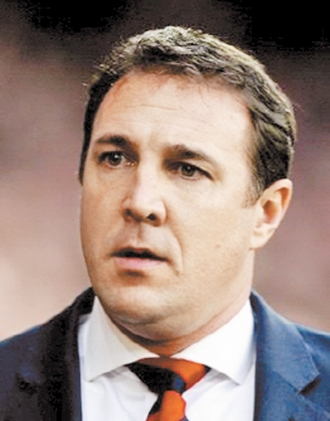 Malky Mackay, Cardiff City’s former manager who was fired in the middle of the 2013-14 English Premier League season due to the team’s poor performance, was considered a good coach by many Korean fans because he regularly gave 25-year-old midfielder Kim Bo-kyung a chance to play.

But a story in the U.K. tabloid Daily Mail on Wednesday local time revealed another side of Mackay.

According to the report, Mackay and his head of recruitment, Iain Moody, are under investigation by England’s Football Association for exchanging thousands of racist, sexist and homophobic text massages that include slurs against Kim.

When Moody informed him in July 2012 that the team was interested in signing Kim, U.K. media reported, Mackay replied via a text message, “Fkn chinkys, there’s enough dogs in Cardiff for us all to go around.”

Prior to signing Kim, Mackay had said, “Kim is a rising star ... I’m very excited about adding him to the roster.”

Mackay and Moody’s behavior has been reported to the Football Association by Cardiff City owner Vincent Tan.

Some believe Mackay’s use of “dogs” may refer to Tan, who is from Malaysia.

After the report was translated and released by Korean media through the Internet, there were thousands of responses criticizing Mackay.

“I feel disgust at Mackay and those signs that say ‘No racism’ that sometimes are displayed on the field prior to a match,” said one of messages posted on Naver.

Yet the texts reveal Kim was only one of Mackay’s targets.

When a list of players was proposed by a French agent in August 2012, Mackay wrote, “He needs to rename his agency the All Black.” In reference to another group of French players, Mackay wrote, “Not many white faces amongst that lot but worth considering.”

And racism wasn’t only his topic. In an exchange with a young player who had a female agent, Mackay wrote, “I hope she’s looking after your needs.”

Mackay had been expected to succeed Crystal Palace coach Tony Puil, who resigned from the post over disagreements with the team’s ownership about issues related to buying new players. But team Co-chairman Steve Parish withdrew the offer after the Mackay’s texts were made public.