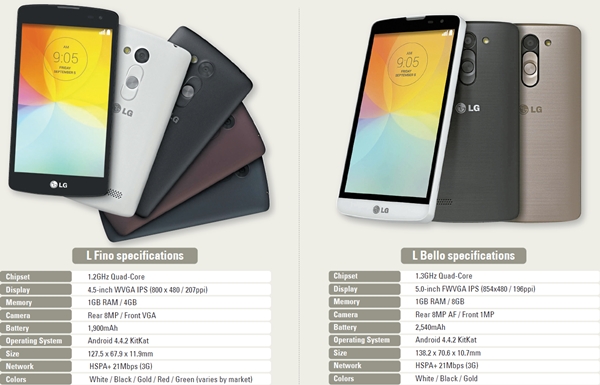 LG Electronics unveiled a new lineup of 3G smartphones, the L Fino and L Bello, to target 3G markets, especially in the Middle East and South America where LTE networks have not been built.

It will introduce its newest L Series smartphones at the IFA 2014 in Berlin.

The L Fino and L Bello are alternatives to higher-priced smartphones and are suitable for teens and first-time smartphone owners in emerging 3G markets, LG said.

The move comes at a time when LG’s global position has been pushed back by competition from Chinese smartphone makers, while the premium market is dominated by Samsung and Apple.

Thanks to its G3 line, the company’s revenues have improved in the first half of this year.

But the recent bankruptcy of Pantech, Korea’s smallest smartphone maker, has raised awareness that LG could collapse if it fails to find a place in the global market.

“Considering that Apple’s iPhone 6 and Samsung Electronics’ Galaxy Note 4 will be launched in September, along with Chinese smartphone makers’ strong position in mid- to low-end products, the market situation for LG should be tough in the second half,” said an analyst at a local securities firm.

“However, since the global premium market will be dominated by Samsung and Apple, LG seems to be targeting emerging markets with its 3G L series, while continuing sales of its successful G3.”

In the second quarter, LG increased sales in the North American market 39 percent quarter-on-quarter with the G and L series. It also saw a 17 percent sales growth in the domestic market thanks to the G3.

LG took aim at the Chinese market by launching the G3, but competition from Xiaomi and other local manufacturers was too tough. Even Samsung Electronics was overtaken by Xiaomi in the second quarter in China.

LG’s market share in the Chinese smartphone market is only 0.1 percent.

In the American market, LG cannot expect steep growth in the second half either due to the launch of Apple’s newest iPhone and Samsung’s Galaxy Note 4 and Galaxy Alpha.

“LG’s strategy will be to focus on expanding its sales of 3G phones in emerging markets, while its competitors aim for premium markets,” said the analyst.

LG said it is offering the G3 in key markets at exceptional prices.

Consumer research shows that the camera is one of the key deciding factors for teenage and first-time customers when choosing a smartphone.

“With competitive specs and accessible pricing, we have high hopes for the L Fino and L Bello to continue our successful expansion into emerging markets,” said Park Jong-seok, president and CEO of LG Electronics Mobile Communications Company.

“Our newest L Series smartphones represent the best of LG in design, hardware and user experience as well as our commitment to bringing the best smartphone experience to 3G customers.”

Starting this month, LG will begin rolling out the L Fino and L Bello in key 3G markets in Latin America, with countries in Europe and Asia to follow.