Ambassador to Japan sets his sights on boosting ties

Ambassador to Japan sets his sights on boosting ties 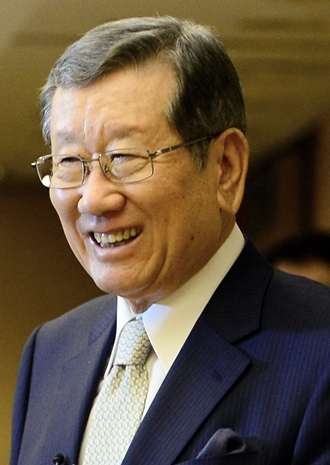 Veteran politician Yoo Heung-soo, set to take his post tomorrow as the new ambassador to Japan, said yesterday that his primary task will be to improve the tense relationship between Seoul and Tokyo in time for the two nations to celebrate 50 years of diplomatic ties.

“The current relationship between Korea and Japan - relations that are not normalized - cannot continue any longer,” Yoo, 76, told a group of reporters at a luncheon in Seoul.

“Now is the time to return to the original state and recover normalized [ties].”

Earlier in the day, Yoo, chairman of the Korea-Japan Friendship Association’s board, was accredited as the oldest top envoy to Japan by President Park Geun-hye at the Blue House.

“Next year marks the 50th anniversary of the normalization of relations between Korea and Japan, and [President Park] said that next year should mark a new launching point for Korea-Japan relations, so I will back her intentions,” he said, referring to Park’s Aug. 15 Liberation Day address.

“I believe Japan will answer in a positive manner.”

The new ambassador’s role in resolving tensions between the two is much anticipated since Yoo, a South Gyeongsang native, is a known Japanese expert who is fluent in the language after having spent his elementary school days in Kyoto.

A former lawmaker and chairman of the National Assembly’s Foreign Affairs and Unification Committee, he came out of retirement to take on his first ambassadorial position at the government’s request.

The post has been vacant since June 15 after former Ambassador Lee Byung-kee was appointed as the new chief of the National Intelligence Service, Korea’s top spy agency.

Yoo said he hopes to be able to use his personal relationships with current and former Japanese politicians and leaders, including Deputy Prime Minister and Minister of Finance Taro Aso, and other connections as a front man in Korea-Japan relations to contribute to salvaging bilateral ties - which he called possibly “the worst ever.”

In regard to the Japanese military’s sexual enslavement of women during World War II, he added, “It’s a problem that Japan has to solve. .?.?.The ‘comfort women’ issue has become a global issue.”

“The past is important,” he continued, “but we should head in a future-oriented path. But a future launched from a more certain and accurate historical perception will be stronger and more durable.”

“I think the two leaders, of course, should meet, and I can’t help thinking both countries have an intention to meet,” he said in response to a possible summit between President Park and Japanese Prime Minister Shinzo Abe. “I think Japan will need to show sincerity in order for a summit.”

Park and Abe have yet to hold bilateral talks since either took office.