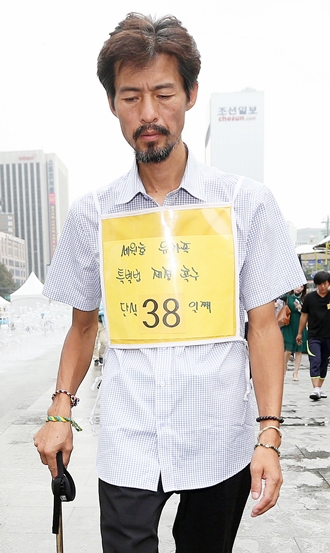 When Pope Francis stepped out of his parade car and approached him just moments before a Mass on Saturday at Gwanghwamun Square, Kim Young-oh bowed his head and asked the head of the Catholic Church for his help in calling for the passage of a special Sewol act.

The law would lay bare the truth behind the April 16 Sewol ferry disaster, a tragedy that claimed the lives of more than 300 people, including Kim’s teenage daughter, and hold those accountable responsible.

Nearly a week has passed since Kim met with the pontiff, and still not much has changed - except for his hunger strike, which entered its 40th day today. Kim, now better known as the father of Yu-min, has put his life on the line for the passage of this special law, which remains stalled following a series of disagreements between lawmakers and the victims’ grieving relatives over the terms.

For the affected families it is just a small step in their bigger quest for peace and justice, but a necessary one all the same. After Kim’s moving encounter with Pope Francis, which was broadcast live by major television networks, expectations rose that the 47-year-old would finally end his monthlong hunger strike. As of yesterday, he was down to 47 kilograms from his normal weight of 58 kilograms.

Public sentiment at one point seemed to turn in favor of the families, but a bipartisan deal reached by the ruling and opposition parties on Tuesday over the specifics of the special law was rejected by the grieving relatives, and so Kim continued his self-destructive protest. His hunger strike camp, located in front of the statue of Admiral Yi Sun-sin at Gwanghwamun Square, has now become a symbol of the distraught families and their fight to make their appeals for the law heard.

It was Kim whom the NPAD’s interim Chairwoman Park Young-sun visited on Wednesday morning in a frantic effort to persuade the victims’ relatives to accept the deal she and the ruling Saenuri Party had struck just a day prior. She pleaded with him to end his hunger strike before it was too dangerous, but Kim did not budge.

The relatives’ central demand is that a special fact-finding committee be enabled with the authority to investigate and indict.

Nearby his tent are about a dozen other enclosures erected by people who have joined him.

On Tuesday, Kim tried to visit the Blue House to request a meeting with President Park Geun-hye, but on his way, he was stopped by a blockade of police officials who claimed they were protecting presidential security.

“I asked the police what legal grounds they had in blocking my passage. They cited the presidential security law. …. What kind of security threat do I pose after 37 days on a hunger strike?” Kim posted on his Facebook page on Wednesday.

He was able to turn in his application on Wednesday. But in the end, his efforts still turned out to be in vain.

“It is up to the ruling and opposition parties to agree on the special law,” Min Kyung-wook, the Blue House spokesman, said yesterday morning. “It is not for the president to mediate.”