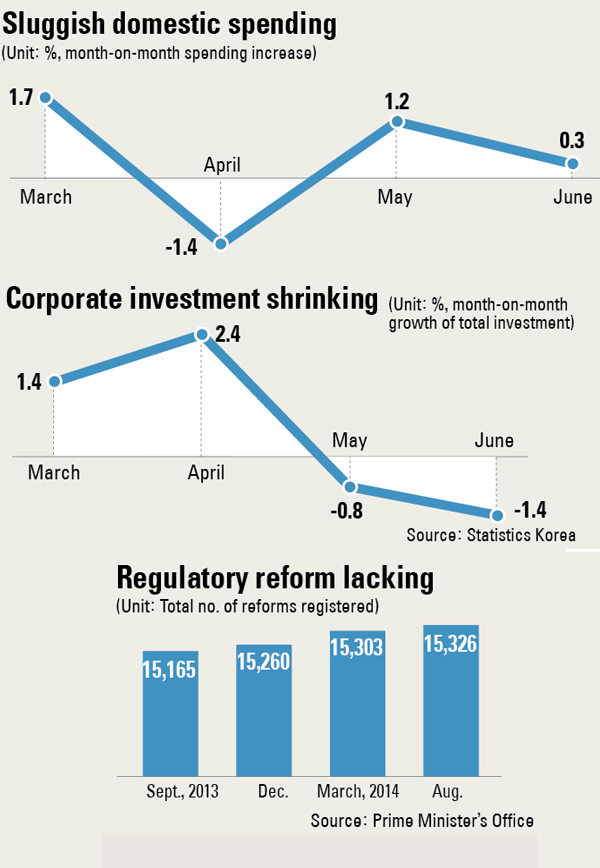 What will happen if domestic consumption doesn’t pick up as much as the government wants - despite all its efforts, including tax cuts, to boost spending?

According to Statistics Korea yesterday, income and spending both rose in the second quarter, but the year-on-year growth rates have declined compared to the first quarter.

The average monthly income of households in the April-June period rose 2.8 percent from a year earlier to 4.15 million won ($4,075). It rose 5 percent year-on-year in the first quarter.

Analysts say the sinking of the Seowl ferry in April took a huge toll on domestic consumption in the second quarter.

To see if new Finance Minister Choi Kyung-hwan’s stimulus campaign is working, spending data for July and August will be necessary.

Although government data for those months have not yet been released, there are mixed signals.

One factor is the milder summer weather this year.

Higher growth may have been due to Lotte’s summer sale, which had a lottery prize worth 1 billion won, the most expensive ever.

However, the year-on-year sales growth fell back to 4.1 percent this month.

“We barely manage sales thanks to tourists from China and Russia,” said a kids’ clothing sales manager at Shinsegae Department Store, which was empty of customers at 2 p.m. on a recent Thursday.

Only spending by the upper class is growing. Hyundai Department Store’s branches in Apgujeong and COEX, both in Gangnam, southern Seoul, saw sales of overseas fashion and luxury furniture rise 20 percent.

However, Chung Ji-yeong, head of the department store’s business strategy team, said they cannot say the economy is picking up unless sales growth continues through Chuseok in September, the nation’s biggest and most important holiday.

The leisure sector also saw lousy business in the second quarter despite the Golden Week holidays in May and June.

The amount of credit card spending at major theme parks shrank 12.1 billion won in the second quarter over the same period last year. It shrank 30.5 billion won on-year at golf clubs during the April-June period.

The milder weather didn’t help. The number of visitors to Manripo Beach in South Chungcheong, decreased to 400,000 from 550,000 last year.

“Sales have halved this year from a year earlier, as there are many people who spend quiet time here and just leave,” said a 67-year-old surnamed Kim who runs a sushi restaurant nearby.

“The heavy atmosphere across society had a significant impact on sales of beer, which is for having fun and parties,” said a spokesman for Oriental Brewery, the No. 1 beer maker in Korea.

Even when OB launched its new beer, Alestone, the company could not run promotional events and utilize World Cup marketing this summer, OB said.

“We struggled since reservations for school trips in April and May were all canceled, and we barely survived because we received government subsidies,” said Kim Jong-pil, head of a school trip travel agency. “However, if we miss the autumn season trips, it will be very tough.”

“When the economy was sluggish in the past, our sales were profitable in the summer,” said the operator of a CU convenience store in Sillim-dong, northern Seoul. “But this year, monthly sales stood at 30 million won in June and July, compared to 40 million won last year,”

Recently, the CU operator asked his son to run the store during night hours to save costs on part-time workers.

“It doesn’t seem it will get any better in the future,” he said.

The Federation of Korean Industries surveyed 37 economic experts and 70 percent said the economy will likely recover to the level it was at before the Sewol ferry accident after the end of this year.

“In order not to put a brake on an economy that is mildly improving, there should not be more political strife and confusion,” said Cho Dong-geun, economics professor at Myongji University.

“We should also make a renewed push for regulatory reforms.”