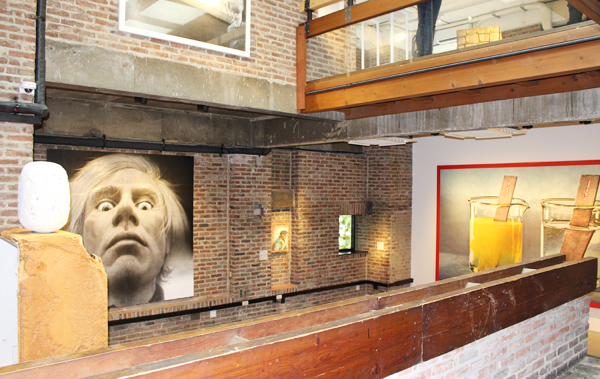 The historic Space office building, designed by legendary Korean architect Kim Swoo-geun, has been converted into Arario Museum in Space and will open to the public on Sept. 1.Korean artist Kang Hyung-koo’s painting “Warhol in Astonishment,” left, and U.S. artist Barbara Kruger’s photographic silkscreen “Untitled,” right, are on display in a room of the museum.By Moon So-young

The iconic office of former architectural firm Space is now being exclusively used to display art - including notable pieces by Tracey Emin and Andy Warhol.

Arario Museum in Space has taken over the renowned structure, which was designed by Kim Swoo-geun(1931-86), head of Space and the leader of modern Korean architecture.

Last year, when the architectural firm went under court receivership, the preservation of the historical building, located near Changdeok Palace in central Seoul, became a hot topic.

And in late November, Arario Gallery - one of Korea’s leading commercial art galleries - finally purchased the Space complex, which includes the ivy-covered brick building designed by Kim, a glass building constructed after his death and a reconstructed hanok (a traditional Korean house). 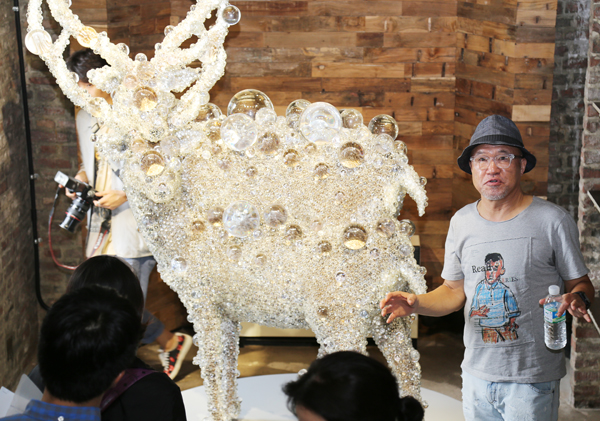 Ci Kim, chairman of both the gallery and Arario, a logistics and retail company, said in an interview with the Korea JoongAng Daily in February that Arario would transform the entire brick building into an art museum and operate restaurants in the glass construction.

The museum, which opens to the public Sept. 1, was unveiled to the press on Thursday. It is Arario’s first museum purely devoted to exhibition and research, rather than for dealing art.

In the press preview, Kim emphasized that Arario had minimized making renovations to the building, which is often called “a masterpiece of Korean modern architecture,” appeasing worries that it would be impossible to hold exhibitions there without remodeling the eccentric interior.

“We made the effort to get the most out of this limited space,” Kim said.

Space’s spiral staircases, well known for both their beauty, inconvenience and intricately-linked small areas, remain in their original state, while art works are installed wittily in unexpected locations. Visitors can encounter a small sculpture in a nook below a set of spiral stairs and media art on the tiled wall of a former bathroom that still has a sink and toilet.

One room houses Korean-American video art pioneer Nam June Paik’s “TV Cello,” along with sculptures that incorporate TV monitors with flashy images. Well-known British artist Tracey Emin’s autobiographical works, including a blanket she appliqueed with aggressive text and a filmed self-performance, can be found in another room. 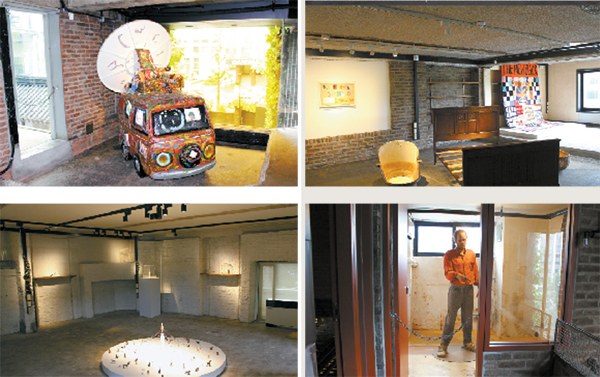 1.Above is a space dedicated to video art pioneer Nam June Paik. Almost all the museum’s spaces keep to the principle of only one artist for each room.2.The room for young Korean artist Lee Dong-wook shows that even the wires and wall sockets used in the Space office were not removed.3.One room is filled with works by Tracey Emin, the Cypriot English artist who reached fame as one of the Young British Artists group.4.The space that was once the janitor’s night duty room now displays a self-portrait sculpture by Gavin Turk, part of the Young British Artists.

These works create a strange harmony with the red-and-black brick walls of the building, a contrast with the typical white walls of museums.

In one room, young Korean artist Lee Dong-wook’s tiny, hyper-realistic sculptures, which are reminiscent of dark fantasy movie scenes, match the old space well. Wires and wall sockets, as well as shelves once used by the architectural firm, were left intact.

A room on the top floor, which was once used by the building’s janitor for night duty, is now occupied by a sculpted a self-portrait by Gavin Turk.

Turk gained fame as one of the Young British Artists group, along with Emin.

“We even left molds on the walls of this room on purpose,” said Arario Gallery executive director Henna Joo.

Most of the areas house just one artist.

“Almost all rooms of the museum keep the principle of only one artist in each room,” Kim said.

One of the few exceptions is a space where Korean painter Kang Hyung-koo’s large portrait of Andy Warhol hangs opposite the U.S. pop art icon’s own work, while a photographic silkscreen by renowned conceptual artist Barbara Kruger is on another wall.

International artists outside of Korea and the West are also featured. 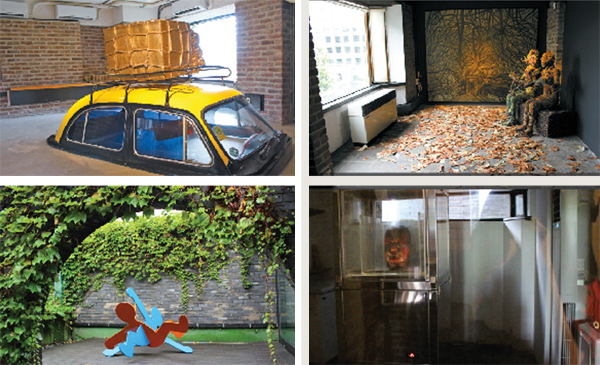 1.Subodh Gupta’s “Everything is Inside.” The Indian artist will hold a solo show at Arario Gallery Seoul from Sept. 1.2.American artist Keith Haring’s sculpture “Untitled (Breakers)” is on a balcony space surrounding the building’s iconic ivy-covered brick walls.3.Philippine artist Geraldine Javier’s “Weavers of Time” shares messages about nature. Javier is one of the influential Southeast Asian artist presented at the gallery.4.Marc Quinn’s famous - or notorious -“Self” portrait made of his own frozen blood is one of the museum’s most illustrious exhibits.

One room is dedicated to a nature-influenced installation by Philippine artist Geraldine Javier. Subodh Gupta’s work, a taxi half-sunken in the river under the weight of reality, occupies another. The Indian artist, who has gained international fame in recent years, will have a solo show at Arario Gallery Seoul next month.

“These are just a part of my collection - relatively small-size pieces to fit this building’s spaces,” Kim said. “You will see works of a bigger scale in Arario’s new museums on Jeju Island, which will open in October. But I hope the works here, too, will help you get an answer to a frequent question you ask me - why I am on the list of the world’s top 200 art collectors.”

Kim was the only Korean listed as one of the world’s top 200 art collectors by the New York-based art magazine ARTnews this year. His name has made the annual list seven times.

Pointing to Marc Quinn’s famous - or notorious - “Self” portrait made of his own frozen blood as one of the favorite pieces Kim said, “Quinn’s works are in accordance with architect Kim’s building as the two share common points of boldness and creativity.”