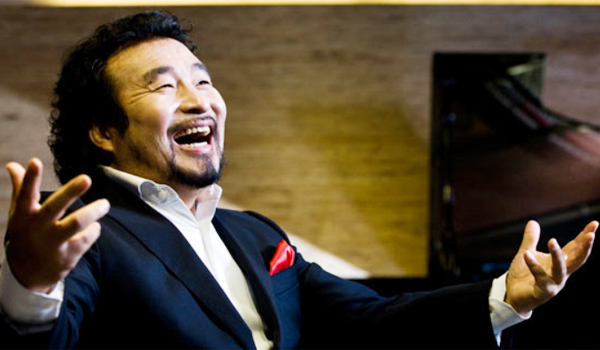 Once a paperboy, a boxer and a theology student, opera singer Cho Yong-kap gives inspirational speeches based on his dramatic life story. By Kwon Hyuk-jae

Cho Yong-kap, now 44, was a paperboy for the JoongAng Ilbo during his high school years from 1986 to 1989. It was just one of the many jobs he performed to lift himself out of a life of poverty and hardship.

To pay for his education, he delivered newspapers at 4:30 a.m. every day and then washed cars at a nearby apartment complex. He did a number of odd jobs, including food delivery and working as a peddler on the subway. He also sold tteokbokki, a popular Korean snack made of rice cakes and red chili sauce.

Every day at 5:30 p.m., Cho attended school - but only after all his work was complete.

Now that boy, who once worked so hard to earn his keep, is a renowned opera singer, who has toured the country and even appeared on television.

“After I began to sing, I started to like my appearance because my short neck, solid body and short height enabled me to be a stronger singer,” Cho said. “Like this, there are many bad things in my life that turned into something good.”

Originally from Gageo Island, on the southwestern coast of the country in South Jeolla, Cho said he was often beaten by his drunken father, who often fought with his mother and once set the house on fire. But even in such desperate surroundings, the boy refused to give up.

“I used to resent my environment, but I found inner peace when I acknowledged the situation that my home is Gageo Island and my father beats me,” Cho said

He first came to Seoul as a middle school student because there was no local high school on the island. He worked at a welding factory at first, where conditions were dire: He was beaten by his superiors almost daily and did not eat or sleep well.

For a while he experimented with different career options. From high school, he practiced boxing, and once advanced to a national championship, though he did not move on. He also studied theology with the intention of becoming a pastor.

But neither was what he was looking for. Then one day, fellow church-goers persuaded him to take vocal lessons, believing he would excel.

“A pastor even funded me with a million won ($981) every month for five years,” Cho said. “I went to Rome and was finally admitted to the National Academy of Santa Cecilia in 1997.”

He stayed in Europe for more than 10 years, winning 28 singing competitions and performing in operas hundreds of times.

He also gave about 300 lectures last year, mostly at various companies in Korea.

“Even a person like me tried to do something,” he said. “Results can’t always be good, but it is important that you are doing something, because [your efforts] are never useless.”

Since then, Cho has established an educational vocal institute, where he teaches 50 students - music majors as well as beginners - for free.

He is also looking for potential athletes from reformatories to help support their endeavors.

“I’m trying to help them just like my pastor helped me become a singer,” Cho said. “If you see a boy from a reformatory who wins a gold medal in the Olympics, he would be one of the children I helped.”