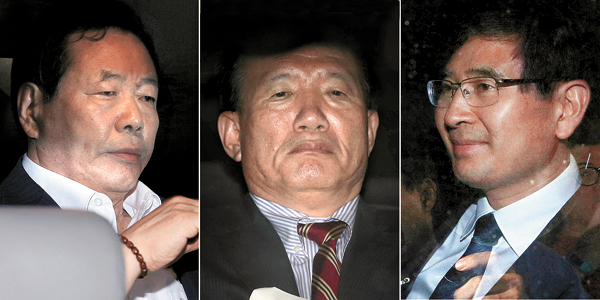 Three out of five lawmakers charged with corruption or election law violations were arrested Thursday night just minutes before an extra session of the National Assembly convened that would have given them immunity from arrest that could have been extended until the end of the year.

The Seoul Central District Court accepted a warrant request for Saenuri Party lawmaker Cho Hyun-yong, the former president of the Korea Rail Network Authority, charged with allegedly pocketing about 160 million won ($157,143) from Sampyo E&C, while the Incheon District Court did the same for Park Sang-eun, who is believed to have accrued illegal political funds.

The Seoul court also accepted a warrant for New Politics Alliance for Democracy (NPAD) Representative Kim Jae-yun, who was accused of receiving more than 50 million won from Kim Min-seong, who runs Seoul Arts College, a vocational school for aspiring entertainers, in return for helping pass legislation.

But critics instantly asked why the Seoul Central District Court refused arrest warrants for two other NPAD lawmakers, including Shin Geh-ryoon, who faced the same charge as Kim, and Shin Hak-yong, who is suspected of having received 15 million won from Kim Min-seong and another 33.9 million won from the Korea Kindergarten Association for legislative favors.

“It is hard to admit the reason for, or the necessity of, Shin Geh-ryoon’s detention because the credibility of the briber’s statement is disputable and his prima facie accusation is not enough for detention,” said Judge Yoon Gang-yeol, who presided over Thursday’s hearings.

Yoon said the same for Rep. Shin Hak-yong, but added that the money he received from the kindergarten association is legally disputable because it was given at a publication party for a book he wrote and was described as a congratulatory gift.

Politicians in Korea raise a lot of funds through such donations at book launch events, a long-exploited loophole in political funding regulations.

Following the issuance of the warrants for its two lawmakers on Thursday night, the ruling Saenuri Party made a public apology.

“We would like to apologize for [the arrests] because the ruling party is supposed to lead economic development for national reform,” said Kim Young-woo, spokesman of the ruling party. “We want the two arrested lawmakers [Cho and Park] to fully cooperate in the investigations and reveal the truth.”

However, the NPAD is claiming that the prosecution made false accusations against its lawmakers.

“The court’s decision has shown that the charges against NPAD representatives are much lighter than those for the Saenuri lawmakers,” said NPAD spokesman Park Beom-kye.

“The warrant requests for the NPAD reps,” Park continued, “seemed to be aimed at obscuring the Saenuri lawmakers’ corruption charges.”