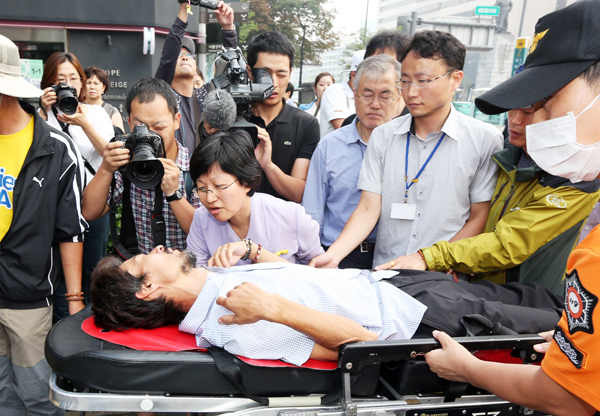 Kim Young-oh is moved to an ambulance yesterday in Gwanghwamun Square, central Seoul, where he has been staging a hunger-strike protest for the last 40 days to demand a thorough probe into the Sewol tragedy. Kim lost his daughter in the ferry disaster in April. [NEWS1]

A hunger-striking father who lost his daughter in the Sewol ferry disaster was taken to a hospital yesterday morning after his health drastically deteriorated as a result of 40 days without food.

Kim Young-oh is on a hunger strike to press the government and legislature to pass a law to form an independent fact-finding panel to investigate the root causes of the disaster and the botched rescue of the passengers, more than 300 of whom died.

Forty days into his hunger strike at Gwanghwamun Square, the 47-year-old grieving father was transferred to Seoul Metropolitan Dongbu Hospital via an ambulance at around 7:50 a.m.

Medical professionals and other relatives of the Sewol victims took the measure after noticing that Kim’s health had worsened to a dangerous level.

The hospital injected intravenous fluids and vitamins and later provided porridge. But Kim denied having the food.

“He is strongly determined to continue the hunger strike,” said Won Jae-min, a lawyer who has been helping the Kim family.

Kim’s daughter Yu-min was one of the 250 11th graders who perished or who are still missing in the tragedy.

“When we took him to the hospital, we tried to persuade him to recover his health in order to keep fighting,” the lawyer continued, “But he wants to go back to the protest site.”

The hospital said Kim’s health can improve marginally with IV fluids but he still lacks necessary calories that can only be acquired through consumption of food.

On Tuesday, the main opposition New Politics Alliance for Democracy reached an agreement with the ruling Saenuri Party on the details of the law to create an independent probe of the tragedy. The crux of the deal was that each of the two parties would select two members of a seven-member recommendation committee tasked with selecting candidates for a special prosecutor to do the probe. The Saenuri Party said relatives of the Sewol victims and the opposition could pre-vet the two members of the committee that it chooses.

But the victims’ relatives, including Kim, rejected that accord, as they did a similar accord made earlier this month. They demand that the Saenuri Party be stripped entirely of the right to choose recommendation committee members.

After that rejection Tuesday night, Park Young-sun, leader of NPAD, and her Saenuri counterpart Lee Wan-koo maintained that no further negotiations are possible on the issue.

Each party blames the other for the impasse and the deterioration of Kim’s health.

Park Young-sun yesterday called on President Park Geun-hye and the Saenuri Party to come forward to persuade relatives of the Sewol victims to accept the agreement on the special Sewol law.

“President Park Geun-hye and the Saenuri Party cannot be free from responsibility about the Sewol ferry disaster, even if they try to evade and hide behind a shield, doing nothing,” Park said yesterday.

“If the Saenuri Party sincerely hopes to deal with pending bills at the National Assembly, they should come forward and try to solve this pressing problem,” she said.

“Kim Young-oh ended up in a hospital,” the statement said, “The government should put first the life of its people.”

“We’ve done everything we can,” Lee Wan-koo of the Saenuri Party told reporters yesterday.