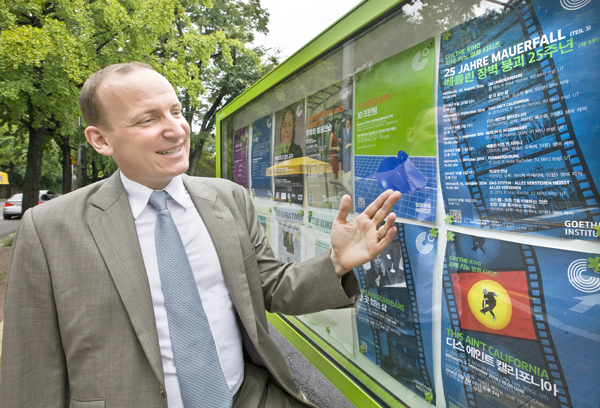 Dr. Reimar Volker, the Goethe-Institut’s head of cultural programs in East Asia, explains the cultural center’s programs celebrating the 25th anniversary of the fall of the Berlin Wall. By Park Sang-moon

“The truth is, I have lost my dream,” mutters Hanna Flanders, the eccentric, chain-smoking protagonist of Oskar Roehler’s film “No Place to Go” (2000).

A novelist whose more recent works have only found an audience in East Germany, she feels personally and financially doomed by the imminent reunification of the country.

A deeply ambivalent woman, the character is loosely based on the filmmaker’s mother. Coming from a wealthy background and draped in Dior, Flanders is drawn to Vladimir Lenin’s ideas and the simpler lifestyles of the Communist bloc, as she herself is an intellectual outcast in West Germany.

Korean viewers came to watch the film on Wednesday, one of many pieces currently being shown at the Goethe-Institut Korea to commemorate the 25th anniversary of the fall of the Berlin Wall.

The free screenings at the German cultural center in Yongsan District, central Seoul, cover a wide range of genres, from documentary to drama, political thriller and even comedy, and are offered with Korean or English subtitles.

But the common denominator among all of them is the focus on the lives of ordinary people and their personal fates within times of political turmoil. According to Dr. Reimar Volker, the institute’s head of cultural programs in East Asia, film helps give a human face to an abstract and intangible historical event.

“In the end, it’s always about the people and their personal fates. In [the film] ‘Sonnenallee,’ (Sun Alley) we see the youth on both sides facing the same problems, the same hardships and the same moments of joy or despair,” he said.

Other films have depicted inter-familial relationships and love stories.

“These are all universal themes, shown through the lens of the political situation in Germany, which enables them to trigger a different kind of empathy,” Volker continued.

The Korean audience, in particular, has shown an apparent curiosity in the films, given the undeniable historical parallels. And the fascination certainly extends into politics.

President Park Geun-hye made an official visit to Germany in March, where she outlined a three-point agenda laying the foundation for a peaceful reunification with North Korea.

The German example “encourages those of us in Korea to cement our hope and our conviction that unification must also come on the Korean Peninsula,” she said in her speech, which has come to be known as her own Dresden Declaration.

Since 2002, the annual Korean-German Forum has been held bilaterally, with civil society members and public figures of both countries taking part to discuss issues of reunification.

“The difference between North and South Korea is much greater now, as is estrangement,” said Volker. “Fortunately for us, there was never open warfare between West and East Germany. The Korean War left a deep wound that is still fresh for many and it has generated a basic sense of mistrust.”

Even now in Germany, fault lines run through society, manifesting themselves in employment rates, federal elections and commonly held misconceptions about the other.

But on a people-to-people level, reunification remains a success. “That is something we really wanted to show, how difficult the task still is, yet how reunification is working and has worked from below,” he added.

While Korean reunification remains illusory for the time-being, the films have the potential to serve as an inspiration for Korean viewers. Art, after all, has always been key to imagining the unthinkable.

Screenings take place at 7 p.m. every second Wednesday until Oct. 15 at the Goethe-Institut. Admission is free.