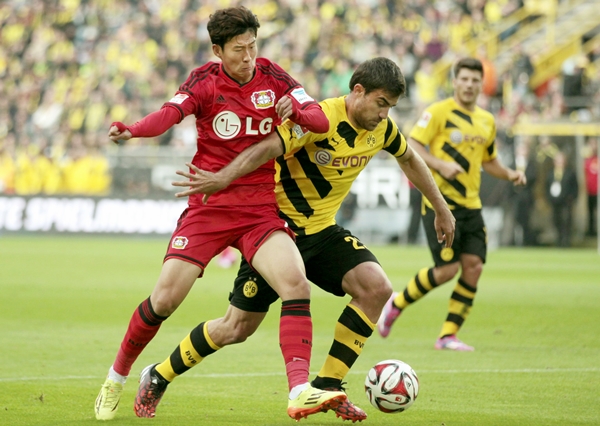 Last season’s runners-up, Borussia Dortmund, suffered a shocking 2-0 home defeat to Bayer Leverkusen at the start of their Bundesliga season on Saturday after the league’s fastest ever goal and another deep in stoppage time.

Winger Karim Bellarabi took nine seconds to score the opener for the visitors with Dortmund below par despite the return of Marco Reus after an injury that saw him miss the World Cup.

Stefan Kiessling scored the visitors’ second goal in stoppage time to secure victory with Bellarabi pouncing on an Erik Durm mistake to set up the forward.

“We did a lot of things right today,” said coach Roger Schmidt, who celebrated a winning debut on the Leverkusen bench. “We attacked Dortmund constantly and were aggressive throughout. We played a top game and deserved the victory.”

Dortmund coach Juergen Klopp, who set a club record for being in charge for a seventh straight season, was missing a string of players, including captain Mats Hummels, keeper Roman Weidenfeller and central defender Neven Subotic.

“It is really painful to start the season with such a result,” said Klopp. “That early goal dramatically influenced the game for the first 25 minutes.”

“We now have some work to do and I accept full responsibility that my team was not fully alert at the start,” he said.

The hosts, who had won their previous three season openers, and also clinched the German Super Cup against Bayern Munich earlier this month, lacked their usual pace.

Leverkusen central defender Omer Toprak allowed little at the back while the hugely talented Hakan Calhanoglu, signed from Hamburg SV for 15 million euros ($19.86 million), was a constant source of danger with long crosses and set pieces.

Dortmund’s best chance came six minutes from time, but keeper Bernd Leno spectacularly saved Matthias Ginter’s header to protect their lead before Kiessling slotted in with the final kick of the game.

Dutch striker Klaas-Jan Huntelaar completed a quick break for the visitors two minutes after the restart to give Schalke the lead and raise hopes of banishing the memory of Monday’s first round defeat by third-tier Dynamo Dresden.

Hanover, which had Germany keeper Ron-Robert Zieler to thank for keeping it in the game, leveled through Edgar Prib in the 67th after he connected with a Leonardo Bittencourt cross in their first real chance of the game.

New arrival Joselu’s thundering drive in the 70th completed an unexpected comeback for Hanover, with Schalke having only themselves to blame for failing to hold on to their lead.

Hoffenheim also got off to a winning start after scoring twice in two minutes through new signing Adam Szalai and Tarik Elyounoussi to beat Augsburg, 2-0.

Hertha Berlin also took a two-goal lead with a brace from Julian Schieber but squandered it in the second half to settle for a 2-2 draw with visitors Werder Bremen.

Hamburg SV, which needed a relegation playoff to stay up last season, drew 0-0 with promoted Cologne.

Champions Bayern Munich made a winning start to its league season, edging past VfL Wolfsburg, 2-1, on Friday.