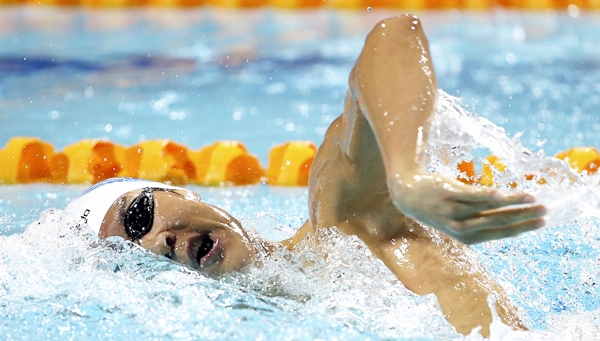 Park Tae-hwan swims during the men’s 400-meter freestyle final at the Pan Pacific Championships in Australia on Saturday. Park turned in the fastest time in the world this year to beat Kosuke Hagino of Japan and Connor Jaeger of the United States. [AP/NEWSIS]

Park Tae-hwan has come away with a gold medal in his final tune-up for the 2014 Incheon Asian Games that start Sept. 19.

In the 2014 Pan Pacific Swimming Championships in Australia on Saturday, local time, the 25-year-old Korean swimming icon won the men’s 400-meter freestyle in 3:43.15. It was his third consecutive medal in the event, having won in 2006 in Canada and at the 2010 event in the United States.

It was Park’s first appearance at an international event since the 2010 London Olympics, in which he won silver medals in the men’s 200-meter and 400-meter free style events.

Park’s winning time Saturday was the best in the world this year in the men’s 400-meter. Kosuke Hagino of Japan, who will compete against Park in Incheon, was second in 3:44.56.

It was predicted the times would be slow as the race was held in an outdoor pool in windy and rainy conditions.

But that wasn’t the case for Park, as he finished first in the preliminary qualifying round in 3:46.10. He then wasted no time in claiming his first gold of the season in an international competition.

Park had not been expected to compete in the Pan Pacific Championships as he didn’t want to expose his race strategy in an event held less than a month away from the Asian Games.

But after discussions with his coach, Michael Bohl, he decided to participate in order to check his competitiveness against other world-class athletes such as Ryan Cochrane of Canada, who had the best time in the world this year in the 400-meter freestyle (3:43.46 seconds) prior to the race and David McKeon of Australia, who was second-fastest (3:43.72 seconds).

Park’s previous two competitions were domestic events: one in Incheon last year and the other at Gimcheon, North Gyeongsang, collecting six gold medals

Beating international swimmers who had the fastest times in the world should be a real confidence boost for park heading into the Asian Games.

It also was meaningful that he beat Japan’s rising-star Hagino, whom he will compete against again in Incheon.

Park, who also has won six gold medals in two Asian Games appearances, is aiming for back-to-back-to-back victories in the men’s 200-meter and 400-meter freestyle races.

He will also compete in the 100-meter freestyle, 200-meter and 400-meter individual medleys, and 800-meter team relay.

Besides Hagano, his biggest rival at Incheon will be Sun Yang of China.