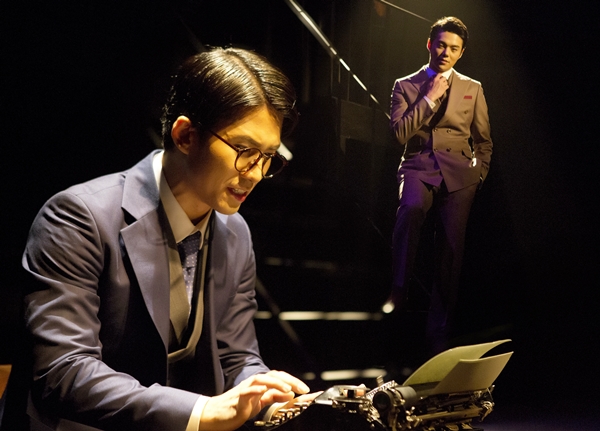 The Korean production of the thriller musical, “Thrill Me,” kicked off at the Uniplex in Daehangno, central Seoul. Provided by the organizer

When it comes to musicals, viewers often expect to be overwhelmed by a flashy stage production, extravagant costumes and heavy makeup.

But with just a single piano, the setup of the spine-chilling musical “Thrill Me” is stark. It is, in that sense, more reminiscent of a play.

The small theatrical musical is based on the true story of Nathan Leopold and Richard Loeb, who killed a young boy in Chicago, in 1924, in order to commit the perfect crime and fulfill each other’s ambitions.

The musical, with the script, lyrics and music by Stephen Dolginoff, premiered off-Broadway in 2005, while the Korean version of the show was first staged in 2007.

Although lacking showy flourishes, “Thrill Me,” pulls the audience into the story completely, aided by the lyrics and melody of the score and the emotions of the two actors.

The story is told in flashbacks from Nathan’s point of view, moving between a parole hearing in 1958 to the day of the murder in 1924.

For this year’s Korean production, which kicked off at the Uniplex Theater in Daehangno, central Seoul, early this month, each of the lead roles is played by three different actors.

Nathan, a character who is highly obsessed with Richard, is played alternately by actors Jung Wook-jin, Shin Sung-min and Jung Dong-hwa.

As for Richard, Lim Byung-keun, Song Won-keun and Enoch each play the role.

At a press conference held on Aug. 14 at the Uniplex Theater, director Park Ji-hye and the cast talked about the show.

“Many well-known actors have starred in the musical, and I was one of those people who wanted to take part in the show,” said Enoch.

“But I don’t think I could have pulled it off if I were younger. The character is very difficult to play - much more difficult than any other roles I have played in the past.”

Park also discussed her thoughts about the show, which is known in the industry as a sort of training school for musical stars. She also had some words to share about its cast.

“My shoulders felt heavy in the beginning, but the cast followed my directions very well throughout practice, so there were no big difficulties,” said Park.

Jung, who plays Nathan, said he felt under pressure, too, because the show is conducted from his character’s point of view, and the actor who plays Richard can be influenced a lot by Nathan.

Song, who played Richard in last year’s show, is taking on the role once again.

When asked about the biggest difference between Richard last year and this year, he joked, “Richard is a year older than last year.”

He added that he tried to play Richard flawlessly this time. Fans can expect to see a more relaxed version of the character this year, he said.

Jung Wook-jin, the youngest of the cast, lifted the mood at the press conference. The actor joked that the fact that he is from the countryside - Yeosu, South Jeolla - helps him express the protagonist’s purity.

The musical “Thrill Me” will run through Oct. 26.