No rush of investors at gold exchange

No rush of investors at gold exchange

Although business is transacted, there are no records and the government can’t levy taxes. This is the character of the underground economy in Korea, where gold is the commodity of choice.

Transactions are made through a direct exchange of bullion or by cash, and the total value not subject to taxation is estimated at 300 billion won ($294.8 million) a year.

In an attempt to tap into that source of revenue, the government in March opened the nation’s first gold exchange market. After five months, are there signs of progress toward making the underground market more transparent?

The exchange market allows the buying and selling of gold in units from grams to kilograms in a way very similar to stocks.

In an effort to attract investors to the newly opened gold market, the government announced it was offering various incentives, including exemption from transaction fees for a year, and a year-end tax refund on income.

“It is much safer to keep the gold in an exchange account than to take it home in actual bullion if the gold is for investment purposes,” says Gong Do-hyun, head of the gold exchange management department.

Despite the incentives and greater security, though, the government gold exchange has not caught on with investors. The daily transaction of gold averages between three (6.6 pounds) to five kilograms of bullion, compared to the estimated 100 kilograms of gold bullion bought and sold daily.

Legally traded gold amounts to only about 25 percent of all gold transactions in Korea. Buyers and sellers of gold can still make more money in the tax-free shadow economy.

In the underground market, there is no 10 percent value-added tax. That alone makes bullion much cheaper than buying at the gold exchange. When the international price for 3.75 grams (.13 ounce) of bullion is 160,000 won, it is 164,000 won to 170,000 won on the local market. For the same amount on the gold exchange, investors have to buy the bullion at 176,000 won because of the 10 percent tax.

Other than for investors who plan to trade the gold like stocks instead of physically owning the bullion, there is little reason to pay more on the exchange. 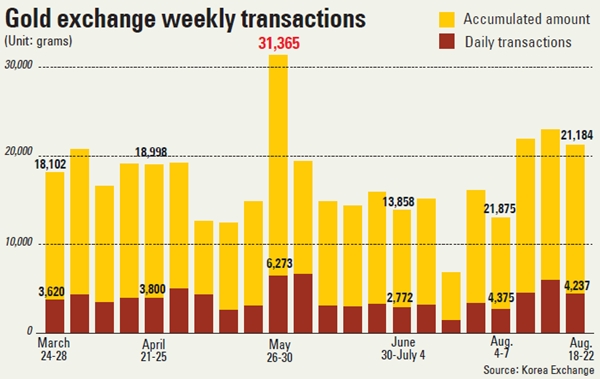 To make it worse, last year the government abolished the deemed input tax as part of its fight against the underground economy.

This is a system where the government provides a 3 percent tax break at the end of the year for sellers who claim they purchased gold for 160,000 won and sold it for 176,000 won, including the value-added tax.

“If the government had continued the system, smelting companies would have continued to supply gold on the gold exchange because the tax return would have been attractive even when the supplier sold the gold bullion for the international price,” says Choi Pal-gyu, who owns a smelting company, Samduck Metal. “Because the government abolished the system, even those that were becoming transparent have gone underground.”

The government said it decided to abolish the system because the tax return benefit didn’t go to the consumers, but to companies that used false documents.

“The policy couldn’t last long because gold has no traces and therefore one day it could be transparent and then the next day it could be traded in the underground market,” says Lee Seung-kyun, at the value-added tax regulation department at the Finance Ministry.

Bullion imports are another problem. The government provides a 3 percent exemption on the bullion import custom tax on metal that goes to the gold exchange. However, the company that imports the bullion has to pay a 0.6 percent special tax for rural development.

To further strengthen its efforts toward converting the underground gold transactions to a more transparent setting, the government last month mandated the issuance of cash receipts for any currency exchange of more than 100,000 won.

When buyer purchases 1 million won worth of gold using cash and doesn’t get a receipt or report it to the tax authority, the jewelry shop owner could be taxed up to 40 percent of the amount of the transaction., or 400,000 won.

The buyer who reports the purchase will receive 20 percent of the levied tax as a reward, while the government takes the other 20 percent.

“We’re suddenly labeled as criminals when selling gold on which our customers don’t want to pay the value-added tax,” says a gold jewelry store owner. “The government is creating this environment where people are ratting each other out when the government can’t even create a normal exchange system.”

Another store owner complains that the tax agency and investigating institutions are trying to manipulate gold traders.

“If buying and selling on the gold exchange results in losses, there is no way that the exchange can attract investors,” says Ohn Hyun Sung, a director of Wolgok Jewelry Research Center. “For the gold transaction to become more transparent and for the jewelry industry to advance, the taxation system regarding gold has to be more precise.”