Chills despite the heat

Chills despite the heat 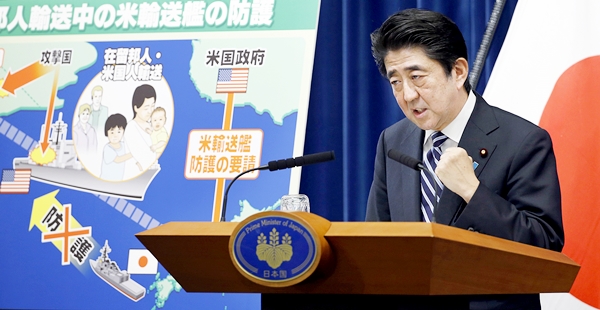 August in Japan is unbearably hot. The island nation is humid, and the temperature goes up to 40 degrees Celsius (104 degrees Fahrenheit). The Japanese people describe the weather as “mushi-atsui,” or “steaming hot.” Liberation Day, which came less than a month after I started my post as a Japanese correspondent, was steaming hot.

In the morning, cabinet members of the Shinzo Abe government and lawmakers visited the Yasukuni Shrine. I was nervously sweating about covering the symbolic site of aggravated Korea-Japan ties under the sizzling sun. But the heat didn’t last long. Suddenly, I felt a chill run down my spine. Old retired soldiers were dressed up in military uniforms, as if they were reminiscing of the war. Young men who don’t know the devastation of the war were holding the rising-sun flag. As they marched at the word of command, they seemed fiercely determined and ready to go to war when the nation calls.

Japan calls Aug. 15 the anniversary of the end of World War II, not the day of surrender. In 1982, the Cabinet defined it as a the day to remember victims and pray for peace. However, it is hard to associate peace in Japan with this day. On the first Aug. 15 after the Abe government approved the right of collective self-defense, Japan seems to be celebrating the fact that they can now start a war, rather than commemorating the end to it.

In the memorial service for the war dead, Prime Minister Abe said, “Peace and prosperity lies above the valuable sacrifice of the people killed in the war.” But he didn’t mention harming neighbors or repenting the past. He didn’t pledge “not to start a war,” either.

Abe has inherited his grandfather Nobusuke Kishi’s ratification of the U.S.-Japan security agreement and preparation for postwar Japan’s involvement in a war 60 years ago. He has been taking steps to enable Japan to wage a war.

Japanese militarism grows by consuming internal discontent. In the later days of the Edo Bakufu, the shogunate proposed an invasion of Joseon in order to calm the dissatisfaction of the warriors. As the Great Depression affected Japan’s economy with layoffs and wage cuts, leading to labor disputes in 1929, Japan’s Kwantung Army invaded Manchuria. Abe tried to recover from the prolonged economic slump after bursts of economic bubbles in the ’90s. But the Abenomics policies are not putting up a good show, and panic over possible earthquakes and radiation exposure is making people more discontent and insecure.

On Twitter and other social networks, debate over conscription is spreading. Former Cabinet Minister Yukio Edano inspired the discussion by saying, “Will Japan be able to recruit Self Defense Forces members after dozens of them die?” Words like “war,” “troop dispatch” and “conscription” are mentioned. The fear of having more war dead is also spreading.

Last week, Tokyo had a series of tropical nights, with extreme humidity and temperatures higher than 30 degrees Celsius. But if you think about Japan being able to start a war, sizzling weather suddenly feels chilly.

* The author is a Tokyo correspondent of the JoongAng Ilbo.