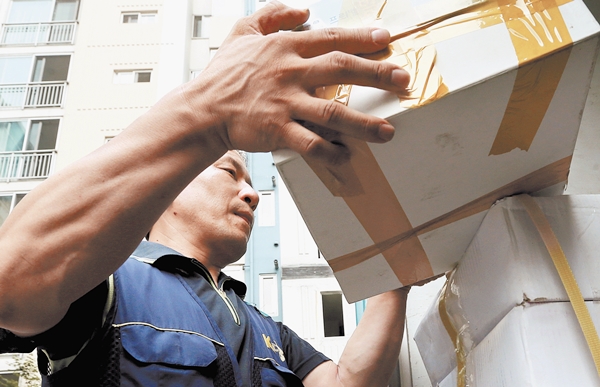 Han Jae-oh, who has been working for KGB Logistics since 2007, took his first official summer vacation since joining the company. By Kim Hyung-soo

Chung Moon-soon, 44, who works at KGB Logistics’ delivery agency in Nowon District, northern Seoul, got a monthly paycheck of 2.93 million won ($2,880) on Thursday, which he said was 160,000 won more than last year.

Han Jae-oh, who works for the same company, last week took a three-day vacation to Muju County in North Jeolla, where his wife’s family lives. It was his first real summer vacation since he began working in deliveries in 2007.

The wage hike and three-day vacation may not seem special, but in the logistics industry, Chung and Han’s situations are considered huge improvements.

The results have come from small, but groundbreaking adjustments.

On June 9, KBG Logistics changed its delivery commission system for company headquarters and authorized branch workers and delivery drivers. For the delivery of a 2,500 won ($2.45) package, a driver previously received 1,000 won, while the company and branch office made 750 won each.

But now they have yielded 50 won each and drivers get 1,100 won, which is up to 400 won higher than competitors offer.

People might think a 100 won increase would have little effect on the industry, but increasing the delivery commission for drivers is one of the most sensitive issues for parcel service companies.

After the increase, KGB Logistics’ 2,500 delivery drivers receive an average of 1.83 million won per month in commissions - an 11.6 percent, or 190,000 won, increase. Calculated on a yearly basis, their annual income rises by 2.28 million won.

In contrast, headquarters and its 156 branches saw their monthly revenue drop by 470 million won. Headquarters said its yearly revenue would decrease nearly 6 billion won. But KGB Logistics President Jang Ji-hwi said it was an inevitable choice for boosting customer service and sustaining the growth of the company.

“The core of this industry is delivery, but recently, the service was collapsing as delivery organizations started to break away,” said Jang, who started his job in December. “Our first solution was to guarantee stable revenue to deliverymen, and to adjust commission I had to run across the nation for the past six months to persuade branch leaders and their employees.”

According to Jang, stable income for KGB Logistics drivers will lead to higher-quality service and more sales, which in turn will benefit headquarters.

Jang’s next move was to improve working conditions, especially by guaranteeing vacations. In theory, delivery drivers can have a day off whenever they want, but realistically it’s difficult because their income depends on how much they work.

So KGB Logistics became the first delivery company to designate a summer vacation, giving all 2,500 drivers a break from Aug. 15 to 17.

KGB Logistics, founded in 1999, is a small player in the industry. Last year, it delivered 47 million packages and had sales of 138 billion won, less than a tenth of leading delivery service CJ Korea Express.

Industry insiders are carefully watching whether the required vacation by KGB Logistics could lead to similar improvements for all 40,000 of the nation’s delivery drivers.

Hyundai Logistics also has started offering insurance and medical checkup programs as well as scholarships to drivers’ children, while Korea Post started a five-day workweek for its drivers last month.