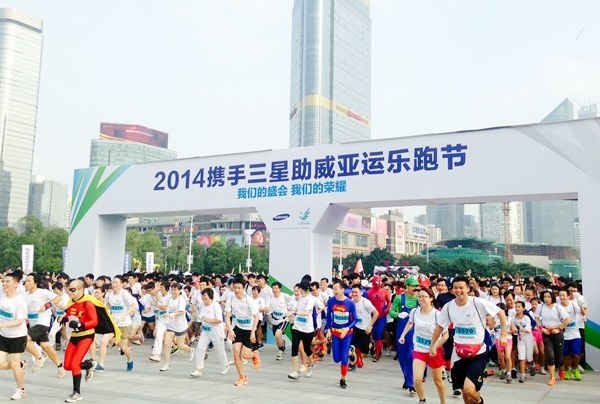 Participants attend the Samsung “Pride Relay” in Guangzhou, China, on Saturday. Provided by the company

Samsung Electronics held a ceremony across Asia to support the upcoming Asian Games in Incheon next month. In hopes of a successful Asian Games, the company held a 3.5 kilometer (2.2-mile) marathon dubbed the “Pride Relay” in Guangzhou, China, where more than 8,000 people participated and a 4.4 kilometer night run titled “Samsung Let’s Glow Run” in Bangkok with more than 2,400 participants. Both events were held Saturday.

For every 1 kilometer covered after the 4 kilometer mark, participants were to donate 10 baht to Special Olympics Thailand.

The Asian Games are scheduled to start on Sept. 19 and close on Oct. 4.

Samsung was the local sponsor for the games when they were held in Seoul in 1986 and became the official sponsor in 1998 when the games were hosted in Bangkok.