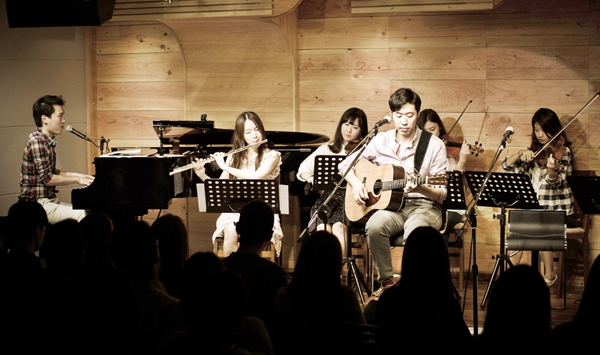 Dongnae bbangjip is a “small local bakery” - a place where people used to chat away to friends or wait nervously for a first date before franchise breadmakers pushed them out of the market.

To capture this sense of neighborhood friendliness and nostalgia, singer-songwriters Han Sung-wook, 29, and Kim Jae-hoon, 31, called their band Dong-nae bbang-jip.

And although they are an indie group, Han and Kim hope to become musicians who continue to “comfort, console and sympathize with people by singing songs of the ordinary life.”

“Our music focuses on ordinary people’s everydayness,” said Kim. “It may not be about extraordinary or impressive experiences, but we sing about the ordinary lives of ordinary people in our own language.”

Kim admits, however, that there are too many indie bands out there that pursue a similar style.

“Many of those singer-songwriters write lyrical songs that include small yet genuine life stories,” said Kim. “So it was important for us to have a distinctive color and concept.”

At first, the idea was to have Han play the guitar while Kim plays the piano. But to make their music distinct, the duo rearrange many of their songs with string instruments as accompaniments, allowing them to produce a luxurious yet professional sound.

“I believe listeners will be able to tell what differentiates us from other indie musicians,” said Kim.

Dong-nae bbang-jip released its first album on April 14, but due to the tragic Sewol ferry incident that happened the following day, the duo said they halted many promotional activities in condolence.

Now, the two say they feel like they can hold concerts and perform the song they wrote for the victims of the Sewol Ferry tragedy. They held a solo show on Aug. 16 in Space Baum in Nonhyeon-dong, southern Seoul.

The duo has also been invited to perform as an “off-stage” band - not in the major lineup - of the upcoming Jarasum Jazz Festival, which they showed excitement about.

“As soon as we formed the team, we performed at the Beautiful Seoul Festival,” Kim.

“As it was our first concert, we were very nervous and finished the concert with a sense of frustration. So we are very much looking forward to performing at the Jarasum Jazz Festival.”

Indie musicians have been establishing themselves more in the music scene, attracting a growing number of fans in recent years. But the duo says that there are still barriers and frustrations.

“As the word itself illustrates, ‘indie’ music is produced independently from major commercial record labels,” said Han. “But realistically, it’s difficult to create something without capital or investment.”

Dong-nae bbang-jip managed to raise part of the production cost for its first album through crowdfunding.

“It wasn’t easy, but it not only helped us to raise funds but also to promote the team,” said Han. “Up to that point, we got there somehow but the real hurdle was how to expose our music to the public. In order to do so, we needed either a management company or a capital but we had none.”

According to Kim, it was through social media that indie musicians managed to attract more fans. However, they said that it’s as far as it can go.

“We feel that being exposed through SNS is the uppermost limit for indie bands,” said Kim. “We ultimately need the power of mass media to break the limit and be recognized.”