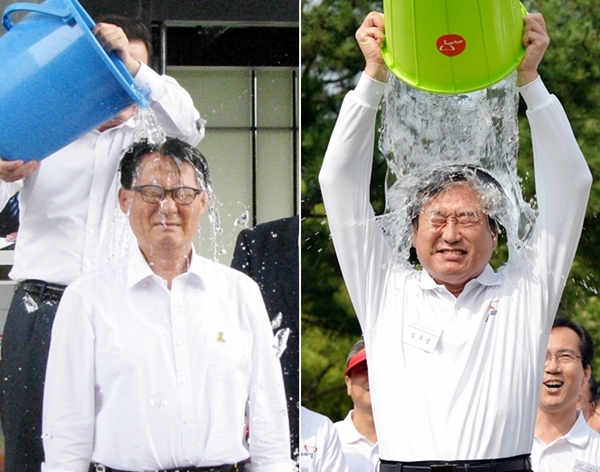 Rep. Park Jie-won of the New Politics Alliance for Democracy, left, and Saenuri Chairman Kim Moo-sung, right, take on the ice bucket challenge, an online charity event that has gone viral around the world. Kim of the Saenuri nominated Park to soak himself in icy water after he took on the same challenge Friday and asked him to persuade hawkish NPAD lawmakers to accept the bipartisan deal on the Sewol law. [NEWSIS]

A global phenomenon of getting doused with icy water has now caught on with improbable figures in South Korea: political heavyweights engaged in a tug of war over the terms of the special Sewol law.

After pouring a bucket of icy water on himself Friday in Cheonan, South Chungcheong during a two-day Saenuri lawmakers’ workshop, Kim of the ruling party nominated Rep. Park Jie-won of the opposition New Politics Alliance for Democracy to take on the challenge, saying, “Please persuade hawkish lawmakers [within the NPAD] after sorting out your thoughts with some cold water,” a reference to internal disputes within the opposition party over setting the special Sewol law’s terms.

Kim also dared presidential Chief of Staff Kim Ki-choon to take on the challenge, saying that he hoped Kim would become more flexible in steering the Blue House in national affairs after getting doused in cold water. He also remarked that the 75-year-old was being too stiff.

The next day Park of the NPAD, who served as presidential chief of staff in the Kim Dae-jung government, accepted the challenge and expressed his desire for people to take the “Sewol bucket challenge” in order to remember the victims whose bodies have not been discovered and the families who are waiting for them.

“Though I participated [in the charity event] there are still people gravely concerned over the passage of the Sewol law and who are still waiting for the return of their loved ones. I hope that ice bucket challenge and the Sewol bucket challenge will go together,” wrote Park on his Twitter post Saturday with pictures of him covered in cold water.

Park urged Ahn, who resigned earlier this month from the top NPAD post to take responsibility for defeat in the July 30 by-elections, to resume political activity after accepting the challenge. Park urged the other two to return to negotiating the special Sewol law and come up with a new set of terms as demanded by the bereaved families of the ferry disaster’s victims.