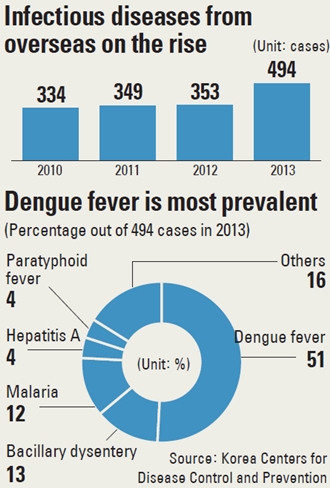 Mr. Park, a 31-year-old man from Ulsan, took a trip to Manila in May. He started to feel sick on the second day in the Philippines, experiencing a chill while sleeping. Park thought he was tired, so he put on some extra clothes and went back to sleep.

But soon he had a headache so bad he couldn’t walk straight. When he visited a local hospital, he was diagnosed with dengue fever.

Park stayed in the hospital for his four remaining days in the country, receiving three IV injections of fluid replacements every day.

“I didn’t even think that I would catch an infectious disease because I was staying in an urban area,” Park recalls. “I wasted my vacation staying in a hospital.”

The horrifying outbreak of Ebola in West Africa is a growing concern to the entire world, including Koreans. A bar in Itaewon was heavily criticized and lost many customers for posting signs last weekend saying African customers weren’t welcome because of the threat of Ebola (the signs were taken down after the resulting furor).

But unlike Ebola, some infectious diseases have reached Korea ranging from lethal ones such as Middle East Respiratory Syndrome (MERS) to less dangerous but painful maladies like dengue fever.

As Korea globalizes and its people make more trips abroad, the likelihood rises that some will return with diseases contracted abroad.

According to the Korea Centers for Disease Control and Prevention (KCDC), the number of cases of infectious diseases contracted in foreign countries rose to 494 last year from 334 in 2010. As of June of this year, there have already been 165 such cases.

Health authorities are concerned the number will substantially rise after the vacation season from July to September.

Most of the infectious diseases were non-lethal.

Dengue fever, which is spread by mosquito bites, accounted for 51 percent, followed by bacillary dysentery (13%) and malaria (12%).

It takes about a week to recover from dengue fever and its fatality rate is less than 1 percent.

But in relatively rare cases it can develop into dengue hemorrhagic fever, with a fatality rate of 20 percent. Fatalities are particularly likely if hospital care, IVs and blood transfusions are not available, so it’s important for the sick to get to hospitals.

“Dengue fever could have been the most threatening disease for mankind if its fatality rate was higher, because it has a high attack rate,” said Kim Yeong-taek, head of KCDC’s infectious diseases department. “Dengue fever vaccines have not been developed yet because the subtropical areas where dengue is prevalent has less developed technology and the disease’s fatality rate is low.”

Bacillary dysentery, which results in diarrhea and loss of appetite, can be transmitted when a person comes into contact with feces of a carrier of the Shigella virus, or when flies or cockroaches carry feces to food that is eaten. Travelers in countries infected with bacillary dysentery should wash their hands regularly and avoid eating street food.

Some experts say less dangerous diseases are more common because they are more evolved: lethal microbes or viruses kills their carrier, which limits their spread. Only non-lethal diseases coexisted with human for centuries.

But some experts disagree. “That is just one of many hypotheses,” says Professor Oh Myeong-don of the Seoul National University Hospital’s infectious diseases division. “Malaria is easily infected and has high fatality [40%].”

But analysts say contagious diseases with low fatality rates should not be neglected. Measles, for example, which disappeared in Korea, has recently returned. It can be transmitted through direct contact, coughs and contaminated materials.

There have been 410 measles patients this year as of mid-July, outnumbering the total of 107 patients last year. It’s thought the disease came from China, Vietnam and the Philippines, countries that recently suffered measles outbreaks. Only 14 of the 410 patients this year got measles in those countries, but they managed to spread it to 352 people in Korea.

“A measles patient can spread the disease to up to 15 people,” said Kim Wu-ju, president of the Korean Society of Infectious Diseases. “Measles can be naturalized in Korea again if the number of patients grows.”

A way to protect yourself against infectious diseases is to get shots, but there are only 25 types of vaccines for more than 800 infectious diseases known to humans. Therefore, a better way is to understand the method of infection and ways to avoid it.

When visiting malaria-infected areas, visitors should take pills a week or two before departing and throughout the visit.

One anti-malarial medication, sold under brand names Lariam, Mephaquin or Mefliam, has such terrible side effects, however, that it should be avoided.

Visitors to MERS-infected areas should avoid contacting with camels or eating their meat or milk.

Yellow fever, prevalent in Africa, and some other contagious diseases such as cholera typhoid and hepatitis B can be prevented by having shots in advance.