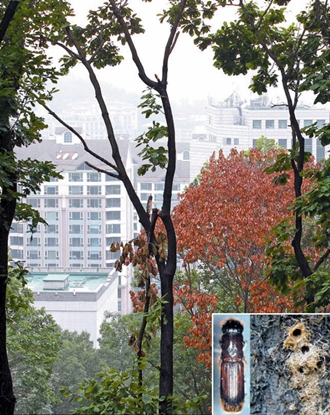 Many oak trees in and near Mt. Umyeon are dying from oak wilt disease, which turns the leaves red. Inset: the ambrosia beetle is a vector of oak wilt disease and leaves holes in oak trees. By Lee Young-hwan

In an apartment complex at the foot of Mount Suri in Gunpo, Gyeonggi, white, frost-like spots dot many of the leaves in the residential flower garden.

But a closer look reveals that the blotches are actually insects feasting off the flora.

Known as Metcalfa pruinosa, or more commonly as the citrus flatid planthopper, they are believed to have come from the United States.

Abusive, harmful pests like M. pruinosa are taking their toll on trees and plants across the region at an alarming pace. The bugs feed on sap to extract the sugar, devitalizing the plants.

“This year, June and July were really hot, but we didn’t have much more rain than usual,” said Kwon Geon-hyung, a researcher at Public Tree Hospital in Gyeonggi, an institute that specializes in tree assessment and treating those afflictions and abnormalities.

“So it’s the perfect conditions for the bugs to spread,” Kwon continued. “This is the first time that pruinosa were found in the southern part of Gyeonggi.”

Residents near the garden have also been annoyed by their presence.

“They usually stick to the window screen,” said Lee Ji-eun, a 29-year-old resident.

“We spray pesticide, but it never removes the bugs,” she added.

In response to complaints, the Gunpo city government enacted a pest control program this summer.

Due to the effect Metcalfa pruinosa have on crops, Korea categorizes them as “harmful pests.”

But the citrus flatid planthopper is just one example of the type of insect that can hurt plants. A number of oak trees were cut down recently after coming into contact with the ambrosia beetle, called the Platypus koryoensis.

The bug is a vector of Korean oak wilt disease and has already killed many oak trees in the country. The Korea Forest Service resorted to cutting down more than 600 oak trees growing near Seoul National Cemetery in Dongjak District, southern Seoul after the trees were contaminated.

Most exotic pests enter Korea through shipped goods and spread to other regions through a well-connected transit system, ecology experts say.

The regions now home to the insects - Suwon, Yongin and Anseong, in Gyeonggi - are connected by the Gyeongbu Expressway.

“The Gyeonggi region is close to Seoul, where pruinosa was first found. Now we can see many of the bugs in Gyeonggi as well,” said Kim Dong-eon, a researcher at the National Institute of Ecology. “Seoul and nearby areas usually have higher temperatures due to urban heat island effects, attracting exotic bugs that prefer hot weather.”

Other monitored insects include the blueberry gall midge, from the United States, and Formosan subterranean termites from Japan and Taiwan.

The midge has caused substantial losses for blueberry farmers in southern Gyeonggi, South Chungcheong and North Gyeongsang, while the termites have caused damage to national cultural heritage sites made of wood.

“The problem is that those exotic species can spread in big numbers under favorable weather conditions,” Kim continued, “so the government should take measures against them at a national level.”