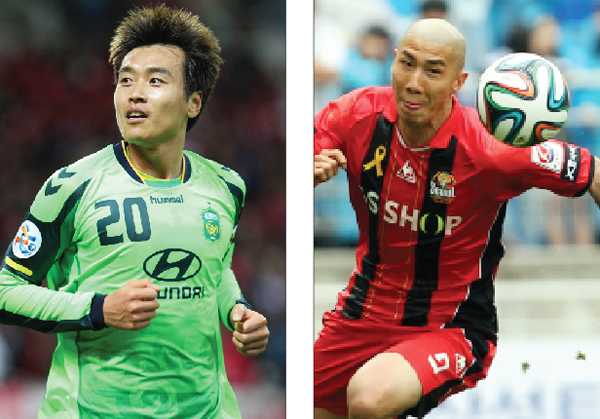 After a disappointing performance at the 2014 Brazil World Cup, the Korea Football Association (KFA) has called up a few forgotten “old boys” for two upcoming friendly matches in September. 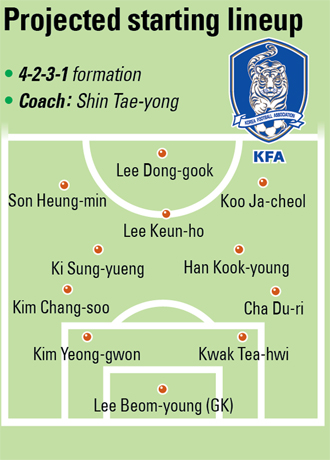 When the football governing body yesterday announced the 22-man final roster for the friendly matches against Venezuela (Sept. 5) and Uruguay (Sept. 8), both of which will be held at home, one of the most notable features was the return of 35-year-old veteran striker “Lion King” Lee Dong-gook of Jeonbuk Hyundai Motors. Lee was last called up to the national team in June last year. If he plays in at least one of September’s A-matches, he will be a member of the Century Club for players who have competed in 100 international matches.

Lee has been shining in the K-League Classic this season with 11 goals in 21 matches, and is expected to be on the top of the Taegeuk Warriors’ offensive line.

“I’m happy for him, but I also want this to be a serious wakeup call for young Korean players,” said Motors Coach Choi Kang-hee, who managed the Korean national team in 2013.

“I don’t doubt that Lee is one of the best strikers in the league, but the problem is that he is expected to play a full match, which is a huge burden for him, considering his age,” Choi continued. “Most nations call up a man in his mid-30s to add some experience, leadership and maybe some impact late in a match rather than asking him to lead the team’s offense. It means that both the national team and the league failed to raise a young and talented striker in more than a decade.

After making his national team debut in 1998, Lee has played in international matches almost every year except in 1999, 2003 and 2008. If he scores in a match next month, he will be the fourth-oldest Korean player ever to score for the Taegeuk Warriors.

In the past few years, Korea has relied heavily on striker Park Chu-young, who still hasn’t found a new club to play for in the 2014-15 season after leaving Arsenal. The 29-year-old was considered the country’s top striker but didn’t get many chances to play in the highly-competitive English Premier League and also struggled in the Brazil World Cup, which he finished with only one attempt on goal in two matches.

Defender Cha Du-ri, 34, was another notable addition to the lineup. He was called up by former national team Coach Hong Myung-bo ahead of the friendly against Greece in March, but missed the match due to an injury then was also left out of the World Cup. He then watched the world’s biggest football event from a press seat as a commentator for SBS. Football insiders say his great stamina and speed, which led to his nickname “Cha-minator,” a reference to the movie “Terminator,” will bring more energy and experience to the field.

“I think the KFA wanted to have some players who have strong leadership on the field as the team still doesn’t have a coach,” said football analyst Kim Ho. “These guys know exactly what they should do on the field and in the locker room.”

Along with Lee and Cha, defender Kwak Tea-whi, 34, will help lead the team as one of the two center-backs.

Only 12 of the 23 members of the Brazil World Cup roster will play in the upcoming matches: goalkeeper Lee Beom-young; Kim Chang-soo; Park Jong-woo; Kim Yeong-gwon; Kwak, Lee Yong; Ki Sung-yueng; Lee Chung-yong; Son Heung-min; Han Kook-young; Koo Ja-cheol and Lee Keun-ho. The 196-cenimeter (6.4 foot) Kim Shin-wook wasn’t called up because he is playing for the U-23 in the 2014 Incheon Asian Games and goalkeeper Jung Sung-ryong, who started two matches in the Brazil World Cup, Park Chu-young and defender Yoon Suk-young and midfielder Kim Bo-kyung were also left off.