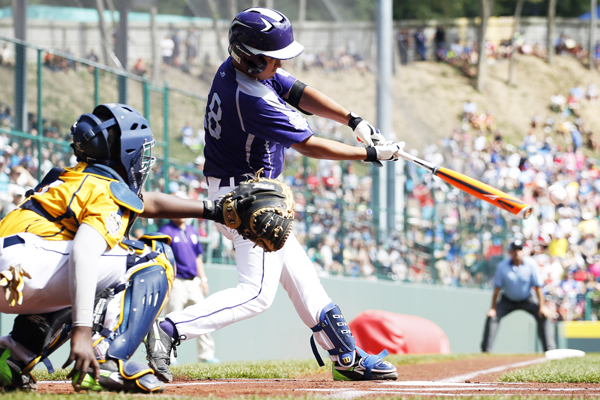 South Korea Hwang Jae-yeong hits an RBI-double off Brandon Green during the first inning of the championship game at the Little League World Series on Sunday in Williamsport, Pa. South Korea won, 8-4 for its first championship in 20 years. [AP/NEWSIS]

Viewing Korea from the outside, people might think the country has a high-quality baseball environment, given its gold medals at the 2008 Beijing Olympics and 2010 Guangzhou Asian Games, and second-place finish in the 2009 World Baseball Classic. More than 6.4 million fans attended games of the nine teams in the Korea Baseball Organization last year, and KBO veterans Ryu Hyun-jin of the Los Angeles Dodgers and Choo Shin-soo of the Texas Rangers are making a name for themselves in Major League Baseball.

Yet manicured fields and international fame were far from the reality of youth baseball in Korea.

That changed on Sunday in Williamsport, Pennsylvania, when the Korea team won the Little League World Series for the first time in nearly three decades, beating Chicago’s Jackie Robinson West team from the United States, 8-4. It was Korea’s first championship since back-to-back titles in 1984 and 1985.

Pitcher Hwang Jae-yeong struck out four in two-plus innings before leaving with a twinge in his elbow and and drove in two runs. Choi Hae-chan, who hit a home run and scored twice, pitched the final four innings, and Sin Dong-wan scored twice, including a solo home run.

Korea scored the first run of the game as Hwang doubled to drive in Sin from second. Choi then scored from third on a fielder’s choice to make it 2-0. They trailed by a run in the third, but an RBI single by pinch hitter Kwon Gyu-hyun in the fourth and Sin’s homer in the fifth put Korea in the lead for good.

“I’m very happy,” said Sin. “I want to go to the Blue House so we can meet President Park Geun-hye.”

In the past eight years, Korea has tried to expand the Little League program as part of efforts to raise the level of the country’s baseball system. Until 2006, Korea had 23 Little League teams, but today there are 158 teams in one league with a total of 3,050 participants.

By comparison, a total of 745 teams play in 283 leagues in Japan. The United States has more than 20,000 Little League Baseball teams.

Many Korean Little League teams have a hard time finding a decent field with soft grass for practices and games. There are only seven fields designated for Little League Baseball in the country: one in Jangchoong-dong, central Seoul, and the others at Namyangju and Guri in Gyeonggi, Cheongju, Gyeryong, Andong and Seogwipo on Jeju Island.

The ground of the field at Guri is covered with rough turf instead of grass and it and three other fields - Jangchoong, Namyangju and Cheongju - have no lights. None of the facilities has a shower or dressing room.

Since most championship games are held in Seoul and Gyeonggi, many teams in rural areas don’t participate. Only players from Seoul were on the team that played in Pennsylvania.

“I know that many fans supported us and we appreciate it,” said manager Park Jong-woo. “I hope today’s win will be a chance to improve the overall environment of Korean Little League Baseball.”