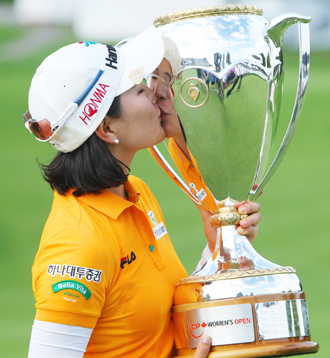 Ryu So-yeon missed the LPGA Tour’s 72-hole scoring record, but she got the champagne shower she was longing for on the final green, reversing roles with Park In-bee.

“I’ve been waiting so long for the champagne,’’ Ryu said Sunday after winning the Canadian Women’s Open for her third LPGA Tour victory. “I was ready to get champagne. I put champagne on In-bee maybe more than five times. Finally, she gave it to me.’’

While Ryu fell short of Sorenstam’s tour record of 27 under, she finished at 23 under at London Hunt to break the tournament record for relationto par by five shots.

The 24-year-old Ryu closed with a 3-under 69 to hold off fellow South Korean player Choi Na-yeon by two strokes. Park - the LPGA Championship winner last week - completed a South Korean sweep of the first three spots, shooting a 68 to finish at 18 under.

The three players are close friends - Ryu and Choi will be bride’s maids at Park’s October wedding - and dined together Wednesday night at a sushi restaurant.

“After I signed my card, Na-yeon asked me, ‘Why don’t we go to have dinner every Wednesday night,’’’ said Ryu, projected to jump from ninth to fifth in the world ranking. “I think we’re going to stick with that.’’

Ryu opened with a course-record 63 and added rounds of 66 and 67 to take a four-stroke lead into the final day. She took a six-shot advantage to the back nine, but that dropped to a single stroke when she bogeyed the par-4 15th and Choi made a birdie.

“When she missed that putt, I thought, `Maybe I could have a chance,’’’ said Choi.

Ryu rebounded with a birdie on the par-5 16th and closed with two pars.

“I thought, `Everybody’s nervous and Na-yeon’s nervous, definitely,’ so I just accepted my nervousness and I just tried to enjoy it,’’ Ryu said.

“I had quite a lot of experience, especially failed experience,’’ said Ryu, also the 2011 U.S. Women’s Open winner. “I think that experience helped me a lot. I’ve been waiting so much. I really want to hug myself. ... One of my friends asked me, ‘So-yeon, do you want to finish in the top 10 in every tournament or do you just want to win one tournament and miss the cut every tournament?’ I said, ‘It’s a really hard question, but at this stage, I really need to win.’’’

“Sometimes I finish runner-up and sometimes I have a lot of regrets, but this week not really,’’ Choi said. “She’s playing well.’’

Spain’s Azahara Munoz had a 71 to finish fourth at 17 under.

Sixteen-year-old Brooke Henderson was the top Canadian and amateur. She finished with a 74 to tie for 46th at 2 under.