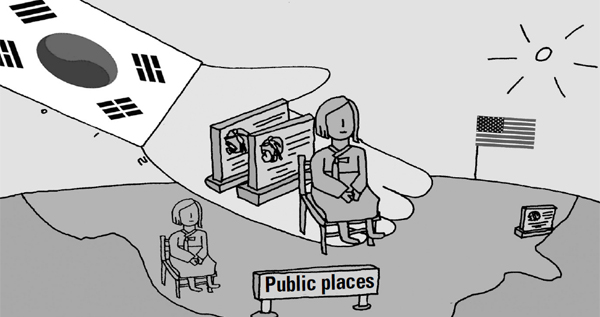 A girl with bobbed hair in simple hanbok dress has been sitting staring stoically and calmly outside the Japanese Embassy in downtown Seoul for two and a half years. The teenage girl in bronze statue form is a constant reminder to Japan of their past deeds and failure to atone for atrocious crimes against women lured and taken away from their homes and forced into military brothels run by Japan’s imperial army. Her symbolic and silent reproach has been more powerful than a million words. Replicas have been set up at six locations across the country and many other local governments plan to host her.

She also is well received overseas. A second statute has been dedicated in front of the Korean American Cultural Center in Southfield, Michigan, a Detroit suburb. The Michigan statue differs from the 1,100-pound monument in Glendale, California, to honor comfort women - mostly Koreans. It stands in front of a city library in public view, raising awareness of the issue with American citizens.

The statue - dubbed Peace Monument - failed to get similar treatment from the city of Detroit. Instead, it had to be confined to the premises of the Korean-American Center in Southfield, where it will be seen mostly by Korean-Americans.

Everything has a reason. Glendale citizens were more touched and opened to the idea because the district is home to one of the largest Armenian communities outside of Armenia, which still bears painful memories of the first genocide of the 20th century. A small country of 3 million people located in central Asia in 1915 saw the beginning of a genocide that would see 1.5 million of its 20 million people killed by the Ottoman Empire over the course of several years.

Many fled from their battered country and came to America. Most of them ended up in Glendale. People with Armenian heritage account for 30 percent of the population of the city in Los Angeles County. They can easily sympathize with the suffering of Koreans under Japanese colonial rule and embraced the comfort woman statue.

Korean-Americans and Armenian-Americans worked together in 2007 while seeking U.S. congressional resolutions urging Japan and Turkey to recognize their past crimes against humanity through mobilization of comfort women for sexual slavery and the Armenian genocide that began in 1915.

The Holocaust under the command of Adolf Hitler in German-occupied territories is considered the worst crime against mankind in modern history, resulting in the deaths of as many as 7 million Jews. Memorial museums and monuments to remember the tragic destruction have been built by the Jews in 20 countries, from Israel and the United States to Europe and Japan. But strictly speaking, the Holocaust wasn’t the largest genocide committed. More than 100 million native Indians died when Europeans infringed on their lands after discovering North America. The natives were brutally killed by the new arrivals and died from epidemics of new diseases brought from Europea.

Yet there are few monuments commemorating the native ancestry and victims in the United States. Even the National Museum of the American Indian in Washington does not disclose complete details of the struggles of Native Americans and their deadly conflicts with the new arrivals.

Other tragic histories are often downplayed and kept in the dark. They are recovered by the persistent endeavors by descendants of the victims. Armenians have been exemplary. They installed 33 museums, monuments and statues in 15 countries. To raise international awareness of their ancestors’ ordeals, the Jews and Armenians stuck to three principles. First, they campaigned and successfully won approval from federal or provincial governments to establish memorials. Second, the monuments were installed in public places under supervision of public institutions. They believed these monuments could serve a public role as part of public entities. Eight monuments to comfort women in the United States are located in Korean-American or Korean compounds. They hardly can be expected to fulfill their purpose when they are located away from the public eye.

Memorial monuments can be serviceable reminders and spread the truth about history to the contemporary generation and foreign community. Foreign people will understand why Koreans cannot easily forgive the Japanese for their colonial excesses and aggression when they understand the real story. Otherwise the Korean government and people will be viewed as narrow-minded and backward for their resentment toward Japanese actions.

The Korean communities have been eager to raise greater awareness of the comfort women issue as a serious infringement on human rights that should be seen in the same light as the Holocaust, racial discrimination and the Armenian genocide. A third statue is expected to be erected in Orange County, California. Memorial actions are ongoing in Australia, Singapore and Canada.

These civilian moves should be done with more preparedness and formality. They must have the blessing and authorization of sponsor cities and countries. Otherwise, they can serve no other purpose than increasing friction with the Japanese community.