The secret life of the renminbi

The secret life of the renminbi 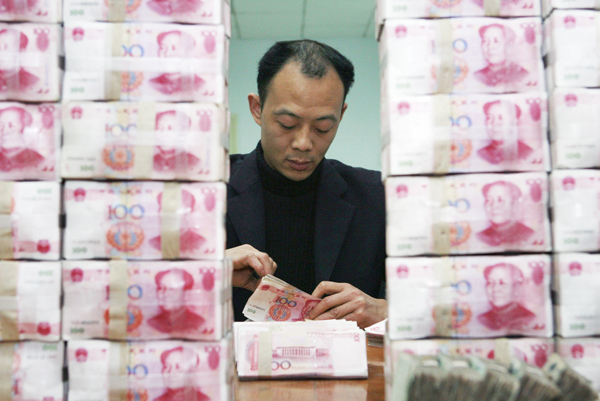 A staff member counts Chinese renminbi banknotes at a bank in Suining, in southwest China’s Sichuan province, in March 2007. [REUTERS/NEWS1]

When discussing whether the renminbi may eventually supplant the U.S. dollar as the dominant reserve currency, it’s useful to keep in mind that we don’t know how much Chinese currency the world’s central banks already hold. That’s because the International Monetary Fund, the only source of data on the currency composition of reserves, doesn’t want to know.

It would seem reasonable to assume that the renminbi is one of the “other currencies” the IMF says account for 2.8 percent of global foreign exchange reserves. It would also be wrong.

Jukka Pihlman, who formerly worked for the IMF and the central banks of New Zealand and Finland and is now a managing director at Standard Chartered Bank, mentions this surprising fact in a column for the Financial Times. He explains that the IMF won’t accept the renminbi as an official reserve currency because it is subject to some government controls, so “any sum invested in renminbi disappears from the reserves.”

Well, sort of, according to Pihlman:

“Some central banks have started to report their offshore and onshore renminbi investments as official reserves anyway, indicating that they believe the criteria of ‘freely usable’ has been met in practice. This is possible, despite IMF reporting rules, because central banks do not need to disclose the currency composition of their reserves when reporting to the IMF and the IMF does not rigorously scrutinize what is being reported, unless a country is under an IMF program.”

In other words, some central banks ignore IMF reporting rules as unreasonable: What does it matter how tightly a currency is controlled by its issuer provided it’s useful to hold assets in it? Others obey the reporting rules because they are aid recipients or just sticklers for formal requirements. As a result, the true reserves share of the redback, as the renminbi is sometimes known, is unknown.

Pihlman is certain its share is growing, which makes sense: In 2012, China passed the U.S. as the world’s biggest trading nation, with exports and imports of goods worth $3.87 trillion. Since 2010, China has allowed cross-border trade deals to be settled in its domestic currency, and the uptake has been enthusiastic. Deutsche Bank predicts that such trades will increase by 50 percent this year to almost $1 trillion. It makes sense for central banks to hold more renminbi as it becomes a major trade-settlement currency.

Its share in global foreign exchange trading is growing, too: According to the most recent triennial review from the Bank of International Settlements, it was the ninth most actively traded currency in 2013 with a 2.2 percent share, up from 0.9 percent in 2010.

China won’t be rushed into dismantling its existing capital controls for fear of spurring capital flight and, potentially, deflating bubbly domestic asset prices, but it’s been successful in pushing the renminbi to foreign central banks through its bilateral swap program, which it began expanding in earnest in 2009. Last month, People’s Bank of China signed a three-year, $23.4 billion swap deal with the Swiss National Bank. That’s conservative Switzerland.

China’s Asian neighbors have long accepted the renminbi’s status as the region’s dominant currency. According to a 2009 study by Hanhong Gao and Yongding Yu of the Chinese Academy of Sciences, 60 percent of the cash in circulation in Mongolia was in renminbi even then. The Chinese currency is freely exchanged in countries including Vietnam and Korea.

The IMF’s practice of ignoring the renminbi as a reserve currency makes its expansion harder to track and easier to dismiss, especially for those who regard dollar dominance as unshakable. Given the recent push by BRICS nations - Brazil, Russia, India, China and South Africa - to set up their own emergency financial institutions, the IMF’s opinion may soon be irrelevant. In a world where authoritarian regimes run the countries with the biggest populations and some of the biggest economies, it may not even be necessary for China to adopt Western-style liberation of the renminbi before it becomes the de facto alternative to the dollar for these regimes, paranoid as they are about the global influence of the United States.