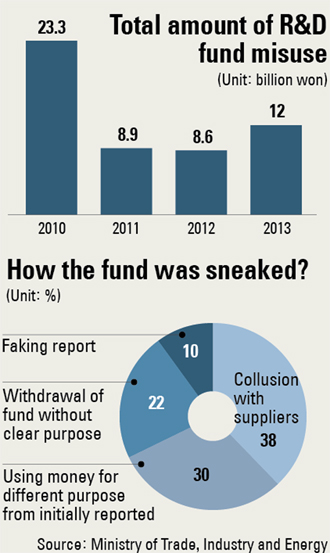 Starting next month, the government will raise the compensation tenfold to 1 billion won ($980,200) for people who report the misuse of public R&D funds, the Ministry of Trade, Industry and Energy announced yesterday.

Currently, compensation for whistle-blowers is capped at 100 million won.

The move is part of the government’s plan to ratchet up punishment for illegal use of government-supported R&D funds that come directly from tax money, which was identified early this month by President Park Geun-hye as one of three key areas of corruption in urgent need of reform.

Implementation of the measure gained momentum after a recent bribery scandal involving the National IT Industry Promotion Agency (NIPA), under the Ministry of Science, ICT and Future Planning.

On Aug. 1, the Seoul Central District Prosecutors’ Office charged three NIPA researchers with received a total of about 1.5 billion won in 2012 from a consortium of IT companies for helping them obtain a government R&D project.

Some NIPA officials and members of the research sector say such practices have long existed, but the incident prompted the Science Ministry to crack down.

Other than giving higher compensation to whistle-blowers, the ministry expanded penalties for individuals involved in the misuse of funds.

Starting next month, the ministry will levy fines of double the amount of money misused. The rule will be applied to corruption cases dating to 2012.

After paying the fine, each researcher or company will be referred to a criminal court and the prosecutor’s office. They also will be banned from any involvement in government R&D projects for five years.

An online-based automated R&D fund management system will be used to monitor all projects done by the Trade Ministry.

The ministry said the online management system transfers receipts for the purchase of research equipment directly to the government.

Such red flags might include excessive spending in the early stages of a project and an unusually large number of transactions with one supplier.

So far, government punishment was restricted to levying of a fine equivalent to the amount of money wrongly used.

None of the researchers or companies has been sent to court.

Cha explained that the misuse of funds has become highly sophisticated, citing the NIPA bribery case.

In many cases, research institutes and their suppliers agree to collude by establishing a paper company, manipulating account-book records and purchasing more materials than the researchers actually need.